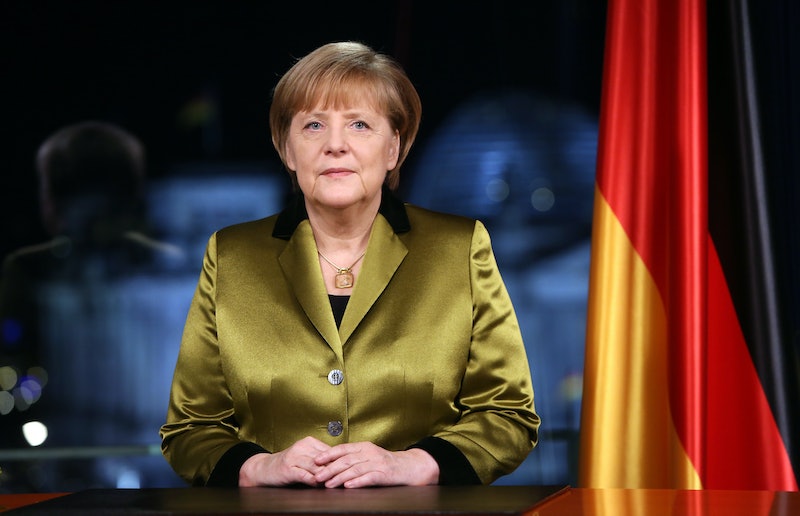 In the midst of a tumultuous time for Europe in its relationship with Islam, one country's leading figure has given the Muslim community a huge boost, as everyone's favorite Chancellor, Angela Merkel, joined Germany's Muslim tolerance rally on Tuesday as a strong rebuke against the anti-Muslim rallies that have taken place with increasing frequency in the country.

Under the banner "Let's be there for each other. Terror: not in our name!" the rally at the Brandenburg Gate was also attended by Germany President Joachim Gauck and a number of other senior German politicians, reported AFP. Organized by the Central Council of Muslims in Germany, the rally is an attempt to combat the perception of violence in Islam in the wake of the Paris terror attacks. The Muslim Council and the Turkish Community of Berlin said:

We Muslims in Germany condemn the despicable terror attacks in France in the strongest terms. We want to express our solidarity with the French victims. There is no justification in Islam for such acts.

Merkel was joined by most all the members of her cabinet at the event, along with Christian and Jewish leaders. With her characteristic poise, the Chancellor said before the rally:

Excluding population groups due to their faith or their origin is beneath the dignity of our liberal state. Hatred of foreigners, racism and extremism have no place in this country.

People who come to us out of deprivation or fear, who need protection, deserve to be treated here with dignity. We need to turn against everything that places into question our fundamental values, the values in our constitution.

Germany's leading lady has been a vocal critic of the right-wing group "Patriotic Europeans Against the Islamization of the Occident" — or PEGIDA — whose rally in Dresden on Monday against Muslims saw an unprecedented 25,000 people demonstrating against "Islamization" of the West.

For all its seeming clout, though, PEGIDA and its sympathizers remain a minority in Germany. Counter-demonstrations against growing anti-Islamization sentiment took place on Monday across the country, with tens of thousands of people dwarfing the PEGIDA rally. Many have accused the group of exploiting the French terror attacks to stoke xenophobia for political gain.

The country's liberal asylum policies have welcomed a flood of some 200,000 refugees in the past year, many of them from Syria, prompting some legitimate security concerns. Germany has had a history of Muslim immigrants, evident in its considerable Turkish population, but Muslims, despite being the largest minority in the country, are still a minority, and religious extremists make up a miniscule, if more visible percentage of the community.