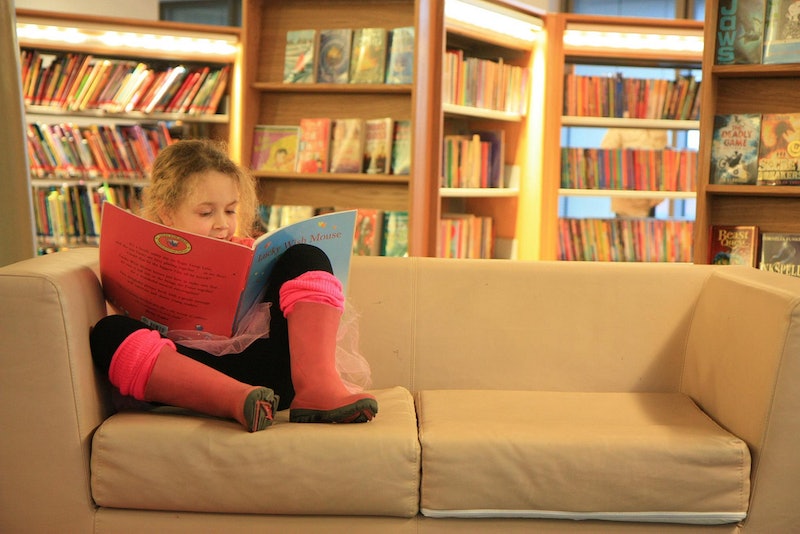 In a generation full of iPads, video game consoles that would have blown my 10-year-old mind, smart phones, and so many screen-filled gadgets that I probably haven't even heard of yet because I'm what society has deemed a "grown-up," children are finding less and less reason to read a traditional print book. Heck, even read an e-book or listen to an audiobook. And this has parents worried. And it should have all of us as a human community worried, because reading during youth has been tied to language development, vocabulary, and creating a lifelong love of reading and education.

But this isn't one of those worry-filled, "kids these days," my-generation-is-better, go-play-outside mumbo jumbo posts. In fact this isn't directed at the kids and teenagers at all. This is a call to all you parents, aunts, baby-sitters and anyone who has a direct influence over what those kids are reading. A recent Scholastic study showed that children are more likely to read, and love to read, if they choose their own books. So hey grown-ups: If you want to stop screentime and introduce a love of reading, stop telling kids and teenagers what they should and should not read.

Scholastic studied 2,558 parents and children, and they found that 91% of people aged 6 to 17 said "my favorite books are the ones I have picked out myself."

About the same number of those polled, 90%, said that they are also more likely to finish a book that they chose themselves. So what are those books? No surprises, the Harry Potter series is at the top. There's also favorite young adult series, like The Hunger Games and Divergent, for the older set, as well as John Green's contemporary hit The Fault in Our Stars. (Another point toward not banning this one, grown-ups.)

In this same study, 71% of parents with children aged 6-17 said, "I wish my child would do more things that did not involve screen time." It seems that a trip to your public library or indie bookstore is in order, parents. Let them pick a couple books themselves, and then happily talk to them about their choices, judgement aside.

But like the original Sherlock or the idea of making my secret boyfriend Idris Elba the star of a detective show, the British got to the best stuff first. Publishing expert Michael Norris told The Guardian that parents need to take a hands-off approach when it comes to picking the books their children read. And this was back in 2010. He said:

Parents have too much of a role in deciding which books their child is going to read. It is turning children off. They should let them choose...What we have found is that parents should not worry whether a title looks too young or too old for a child. If a book has caught their attention, then let them take it and make up their own mind.

Take that, book banners. Oh and Neil Gaiman has said as much back in 2013, too, saying that well-meaning adults could actually be hurting their children's love of reading.

Well-meaning adults can easily destroy a child's love of reading. Stop them reading what they enjoy or give them worthy-but-dull books that you like – the 21st-century equivalents of Victorian "improving" literature – you'll wind up with a generation convinced that reading is uncool and, worse, unpleasant.

Teachers and other educators, ones who have a direct impact on and insight into children's reading, have also been saying this for years. Many are against strict assigned reading, instead pushing for more general reading goals, having seen the impact first-hand.

So when you're appalled that children are reading about kids killing kids in The Hunger Games or, oh say, rewriting Harry Potter because it doesn't conform to your beliefs and then making your kid read that version, you're not doing your child any favors. In fact, you are more likely harming them and squashing their love of reading. And then it will only be our fault when the new generation grows up preferring their tablet to reading.

More like this
Netflix Shut Down 'Bridgerton' S3 Rumours About A “Very Dark” Storyline
By Bustle
We’ve Entered The Hot Boy Reader Era
By Samantha Leach
Rupert Grint Just Shared A *Major* Update About Ron Weasley’s Future
By El Hunt
10 Equally Romantic & Heartbreaking Books From British & Irish Authors
By Shahed Ezaydi
Get Even More From Bustle — Sign Up For The Newsletter
From hair trends to relationship advice, our daily newsletter has everything you need to sound like a person who’s on TikTok, even if you aren’t.