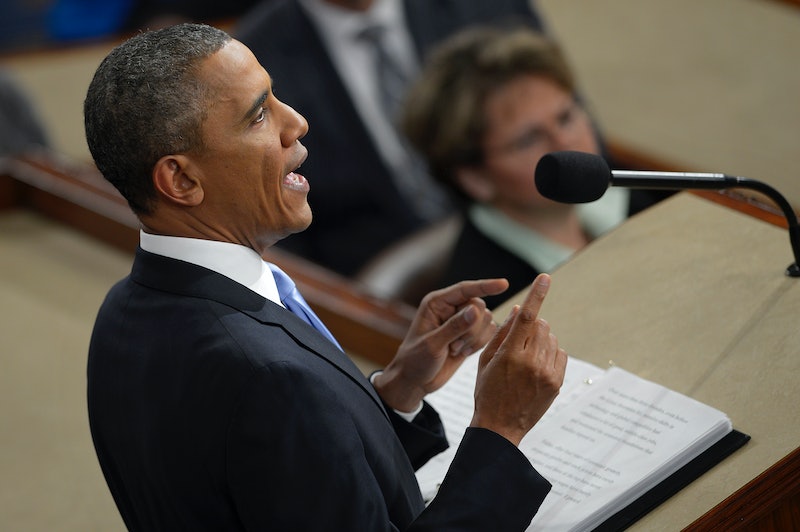 If you were expecting President Barack Obama to discuss the Affordable Care Act or the state of women's reproductive health in his seventh State of the Union address Tuesday night, you were undoubtedly disappointed. But the middle class, the economy, and jobs were major talking points, making up the crux of Obama's annual address as the Commander-in-Chief asked Americans to "turn the page" and embrace "middle-class economics," even as Obama gave his shortest State of the Union address to date. He touched on quite a few topics during the speech, but some terms were obviously more popular than others.

Obama declared that the State of the Union was “strong” during the address. It was a theme that ran throughout his speech, with the president calling for stronger infrastructure, stronger trade deals, and a "stronger America" in general. The "middle class" was the talking point of the evening — though the phrase was uttered only seven times, it was obviously the focus of Obama's speech, and it underlined his 18 mentions of the "economy" and 28 mentions of "job(s)." But Obama didn't just rely on his old stand-bys to give a safe speech. For the very first time, "bisexual" and "transgender" were mentioned, as the president continued to recognize and advocate for the LGBT community.

By far the most popular word Obama used was "America," as shown in this graphic of the most common words he used during Tuesday's State of the Union address:

Although it might seem that words like “liberty” and “freedom” should be used throughout the State of the Union address, President Obama mentioned “liberty” not a single time, and said “freedom” only once. Contrast that with former President George W. Bush — when he was president, in the midst of wars in Iraq and Afghanistan, “freedom” was a major component of his eight State of the Union addresses, according to PBS. Terrorism, too, was something Bush broached significantly more than Obama, though the current President did mention "terrorism" or "terrorist" nine times in Tuesday's speech.

Other words noticeably absent from the president’s address? Both “Affordable Care Act” and “Obamacare” were never mentioned. Healthcare came up a total of six times, mostly in the context of helping middle-class families. Obama breezed past a "woman's right to choose," (mentioned one time) and immigration (mentioned twice) but spent noticeably more time on "climate change" (mentioned three times) and college access and affordability ("college" and "community college" were mentioned a total of 12 times), as well as open and free internet (mentioned three times).

And the award for the most unique SOTU reference? This year that goes to "Instagram," with the social media platform garnering its first mention in the address (and Obama trying perhaps a little too hard to prove how "hip" the White House is with the technology all the kids are using these days — especially since it turns out Scott Kelly doesn't even have an Instagram). Also a newbie: Hacker.

So what does all of this mean? The speech certainly didn't touch on every important topic, but it did return the President to his progressive roots, and guarantees Obama isn't planning to shy away from controversial issues during his final two years in office.