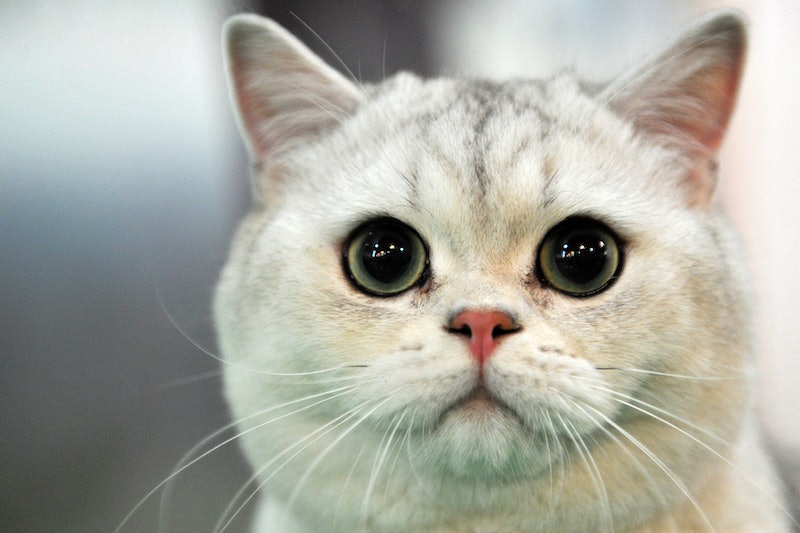 On the scale of unexpected animal stories, this one is definitely pretty surprising. A hermaphroditic cat in Canada is having gender reassignment surgery. Now there's a sentence I never imagined myself typing.

When Colleen Clarke-Murphy's daughter brought home a stray cat, the Newfoundland family christened the cat Mittens and decided to adopt, not suspecting there might be anything atypical about the animal. But after a check up at the vet, they learned that Mittens had both male and female genitalia. This was, naturally, something of a surprise. And, due to health concerns, it also required some extra veterinary procedures.

Poor Mittens needed to be both spayed and neutered — as if one wasn't bad enough on its own! — and due to bowel issues and trouble urinating caused by Mittens's hermaphroditic condition, the vet also decided that it would be best for Mittens to undergo a cat form of gender reassignment surgery. Colleen Clarke-Murphy said that she had hoped to make Mittens female — she already has one male and one female cat and would prefer not to add more males to the mix — but conceded that "They're the ones who know what they're doing."

Apparently gender-related cat surgeries aren't as uncommon as you'd think. In fact a procedure known as a perineal urethrostomy is often used to treat male cats suffering from urinary problems. The surgery isn't really a "gender reassignment" procedure since changing the biological sex of the animal isn't its purpose (plus I wonder whether cats actually have "gender" in the way we humans understand it; sex does not equal gender, after all). But the effect of the surgery is that male cats no longer have male genitalia.

Still, having a truly hermaphroditic cat is a rare thing, as is having a surgery specifically to change a cat's sex. All told, between being spayed, neutered, and getting his "gender" reassignment surgery, Mittens's vet bills will come to around $1,500. The Clarke-Murpheys say that a friend is conducting a Facebook auction of used items to help with the cost. Which is pretty awesome considering Mittens is such a new addition to the family. But the Clarke-Murpheys say that family is family.

The story is certainly heartwarming, though hopefully we will live in a world where all human trans and intersex people will also have access to the option of gender reassignment surgery, should they so choose — and also get the kind of family support that Mittens has. Here's hoping!

And in the meantime...have some more cats to get you through!