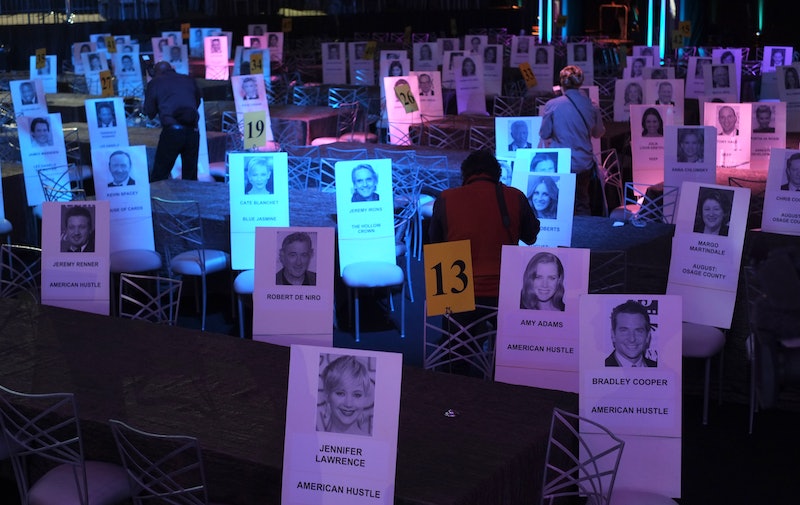 The SAG Awards are Sunday, Jan. 25, and they're unquestionably one of my favorite award shows of the year. Why? Aside from the "I am an actor" opening montage that gets me every time, I love the fact that Hollywood takes the time to honor each other. To me, it's the closet thing we will ever get to The Office's Dundie Awards in real life, where a group of coworkers get together to hand out trophies and congratulate each other on a job well done. However, when it comes to the actual logistics behind the awards, things get a little confusing. Who's in the Screen Actors Guild? Since just about everyone shows up to the awards, are all celebrities SAG members? And if they are, do they get to vote? These are pretty important questions.

Although all celebrities we're familiar with are SAG eligible, meaning they've completed at least three days as a background actor on screen, that doesn't necessarily mean they're all members. Joining SAG does have a ton of benefits, like health insurance, help with negotiating contracts, and retirement, but by no means are actors required to join. It does come with a pretty hefty start up fee of $3,000, annual base dues of $198, and work dues, so I can definitely see why new actors who are still getting established would pass until their career was more profitable.

And as for those who have joined? They can totally vote. According to the SAG Awards website, there are two stages of voting, much like there are with a lot of award shows. In the first stage, members of the randomly selected Motion Picture and Television Nominating Committees — which are each made up of 2,200 members — are tasked with coming up with the list of nominees, aka getting all the hard stuff out of the way.

Next up is the second phase, which involves all members of SAG — the ones who have paid their dues, anyway. Paper ballots went out in December for those who like to kick it old school, and online voting is available, too. Ultimately, it's the entire community of actors who select the winners from the nominee list, so when you see Amy Poehler win all the awards (or, you know, just the one she was nominated for), know that it was because her BFF Tina Fey probably voted for her. And that, to me, is a beautiful thing.