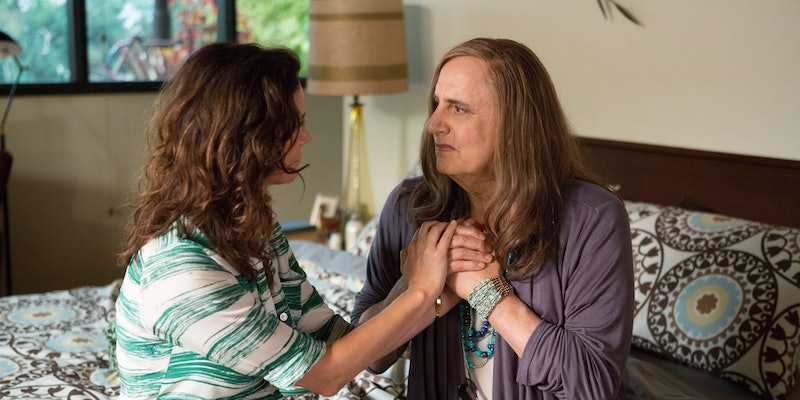 Transgender people have been getting a lot more recognition lately. The TV show Transparent won big at the Golden Globes, President Obama used the word transgender for the first time in a State of the Union address, and Glee announced tit'd be incorporating a transgender storyline in its final season. But there still needs to be more attention on the plight of the transgender community, and Amazon is stepping in to help. On Saturday, Amazon will make Transparent free for everyone to watch, regardless of whether or not you have an Amazon Instant account.

This is a big deal because, with all the accolades Transparent has received of late, Amazon could use that interest to draw more paid users in. But instead, they're giving away the content for free because they understand the importance of getting this message out there to the public.

While things have improved for transgender people in regards to their representation in media of late, things are by no means fixed. The transgender community still faces bullying, depression, death threats, and suicides at an alarming rate. The death of Leelah Alcorn shows us just that. The 17-year-old was forced to undergo conversion therapy with the intent of forcing her to stop wanting to transition. Instead, after constantly being misgendered and mistreated by her parents for too long, she committed suicide.

But things are changing, slowly, and the major way awareness can be spread is through media. Remember what the documentary Blackfish did to SeaWorld? The story of Dawn Brancheau's death was out there since 2010, but it wasn't until the documentary chronicling the evidence was released that SeaWorld faced any real ramifications.

What we watch definitely does have an effect on how we think, which is why Transparent is so important. The series is not only beautifully made and wonderfully acted — it tells a significant story. And now that Amazon is releasing Transparent for free, no one has any excuse not to watch it.