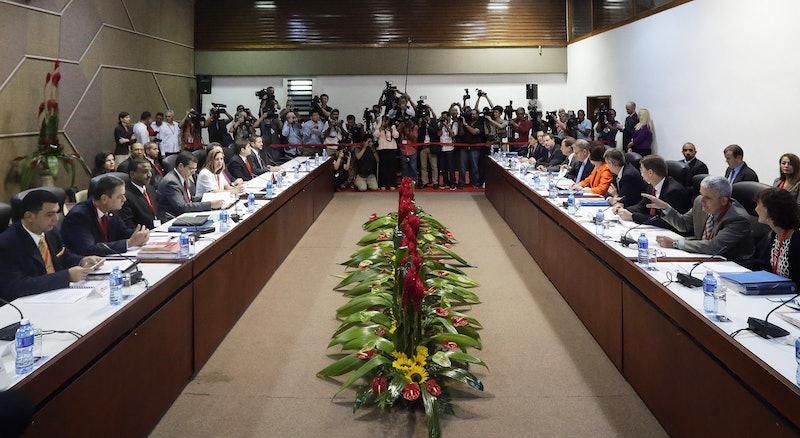 Although heartening in its intentions, the long road to Cuba and the U.S. warming up to each other will set up a confrontation over many differences, if the first round of high-level discussions are any indication at all of things to come. The past two days of historic talks in Havana saw relations between the U.S. and Cuba progress, despite disagreements over human rights and other issues.

Both sides signalled positive developments, but they were quick to caution the differences that remain between them. U.S. Assistant Secretary of State Roberta Jacobson, who leads the U.S. delegation and is so far the most senior American official to visit the island country in more than three decades, said in a press conference after the talks on on Thursday:

We have to overcome more than 50 years of a relationship that was not based on confidence or trust. There are things we have to discuss before we can establish that relationship.

Chief among the issues is the role of human rights in the new relationship. Both countries subscribe to a very different set of values: Cuba's human rights reflect a more socialist ideology — that is, the right to universal healthcare and education as well as access to food and housing and the like. Cuba has also been accused of stifling free speech and political dissent, the cornerstones of Western democracy in which individual freedom and expression are held dear.

Leader of the Cuban delegation, Josefina Vidal, said that other issues discussed included removing the island country from the State Department's list of state sponsors of terrorism and lifting the economic embargo, though the latter can only be authorized by Congress — now dominated by a stubborn GOP that has expressed vocal opposition to the U.S.-Cuba deal in the form of Sen. Marco Rubio.

For Cuba this means reciprocal respect for the political, economic and social systems of both states and avoiding any form of interference in each other’s internal affairs. Nobody should expect that to improve relations, Cuba will relinquish its principles.

Despite the many disagreements that lie between the two, signs point to an overall constructive first meeting, if not in a practical sense, then symbolically. It marks the first time officials from both countries have met face-to-face in decades, a previously unfathomable sign of positive change following horrific incidents between both countries such as the Cuban Missile Crisis, the Bay of Pigs fiasco, and the incessant attempts to assassinate the now-retired Fidel Castro.

Expressing optimism that both sides will find ways to iron out their disputes, Vidal said: