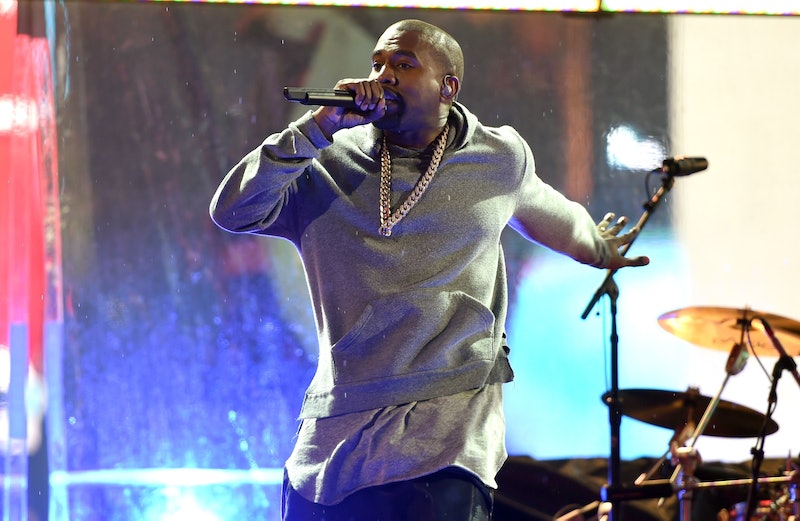 Well, this is amazing news: Kanye West and Rihanna's new duet is reportedly going to drop soon. How soon, you ask? We don't know yet. Perhaps a 2015 Grammys performance is in the works? (Hey, I can dream, can't I?) West previewed the track at the iHeartMedia Music Summit in Burbank, California on Wednesday. According to Billboard, once the song was finished, the rapper "slammed his laptop shut and walked offstage to a standing ovation." Wow. If that doesn't get you hyped, I don't know what will!

During West's 45-minute iHeartMedia appearance, he reportedly talked about his "responsibility to innovate" as an artist and retracted his 2013 statements that suggested that he didn't care if his music was played on the radio (he was, after all, speaking to a room full of radio programmers). "It was a joke! You weren’t supposed to take it seriously — I want to be on the radio!" West told the crowd, according to Hits Daily Double.

It certainly seems as though West's trying to get back in radio's good graces before the release of his new album. That's definitely a smart move, especially when you consider that the 37-year-old's last major crossover hit was probably "All of the Lights" in 2011. West may have his sights set on chart domination in 2015. How exciting.

Here's everything we know about West and Rihanna's new duet so far:

In a January interview with Billboard, rapper Ty Dolla $ign revealed that he had recorded a song with West, Rihanna, and Paul McCartney for West's new album. Because we know it's a duet, I'm guessing that McCartney and Ty Dolla $ign contributed to the production side of things.

Billboard reports that the song features an acoustic guitar. That's a little unexpected, right? (In truth, West has always been skilled at incorporating elements from many different genres into his music, so I probably shouldn't be so surprised.)

Billboard also reports that the track has a "big, soaring chorus and melody." Yes, please!

It'll Probably Get Stuck In Your Head

Billboard describes the duet's hook as "massive." Oh boy. That should definitely help the track get radio airplay!

Everything Could Be Ready for Release

In his aforementioned Billboard interview, Ty Dolla $ign said he "heard" that the song's music video had already been shot.

In other words, 'Ye and Rih's duet could be here any day now. Stay tuned.