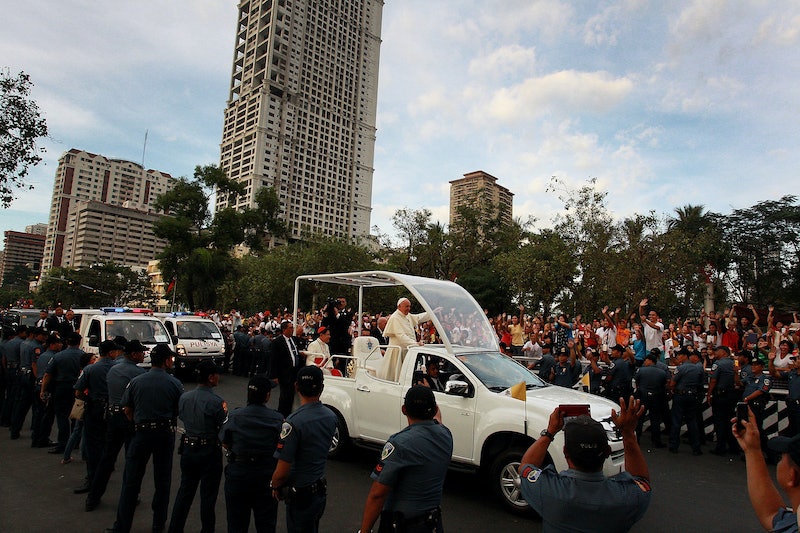 The lingering national flush from the Pope's stop last week has been punctured by an investigation into the Philippines government "relocating" homeless people during Pope Francis' visit, of which poverty was one of his central themes.

Social Welfare Secretary Corazon Soliman revealed that 490 beggars and homeless people were removed from the shanties and hammocks that many of them lived in along the Manila Bay seafront, the venue of the pope's Sunday mass that attracted millions, reported The Guardian. They were brought to a luxury resort on the outskirts of the capital. The log cabin resort, stately christened the Chateau Royale, charges hundreds of dollars for a room per night. The Philippines government footed the bill for the homeless to stay there from January 15, the day of the Pope's arrival, until the Monday after his departure, when they returned to their shacks on the seafront.

Members of Parliament demanded an explanation for the move, saying that Francis would have wanted to see the country as it truly was. House of Representatives member Terry Ridon, who is attempting a congressional inquiry into the matter, called it a "clearing operation" and added:

[It is] truly horrendous, given the fact that Pope Francis visited our country to — first and foremost — see and talk to the poor... The Pope would have wanted to see the Philippines, warts and all. Let us not pretend that we are a first-world country.

An unprecedented six million people flocked to the Filipino capital to celebrate mass with the pope, the centerpiece of his tour in the bastion of Roman Catholicism. In a country facing unabated poverty levels, the Argentinian pontiff focused heavily on social justice, poverty, and income inequality, issues close to his heart and important to bishops in the developing world.

Soliman defended the government's move, claiming that the homeless, during their brief hiatus from the capital, were provided training in line with a government program launched last year affording 11,000 homeless families with rent-free accommodation. Part of the training included familiarizing themselves with rooms that had doors and toilets, reported The Guardian. She also said that the government moved them to protect the vulnerable group from the massive crowd, where they would have been exploited and discriminated against, adding:

You cannot hide poverty. When the pope landed, the first thing he saw was the shanties by the river.

The move, however, has undoubtedly caused outrage in the country, as opposition groups and human rights organizations accused the government of "whitewashing poverty." The House is set to begin an inquiry into allegations that the government rounded up street children in the capital and locked them in detention centers or, as in this case, in resorts, to temporarily “clear the streets” of Manila while the Pope was visiting.