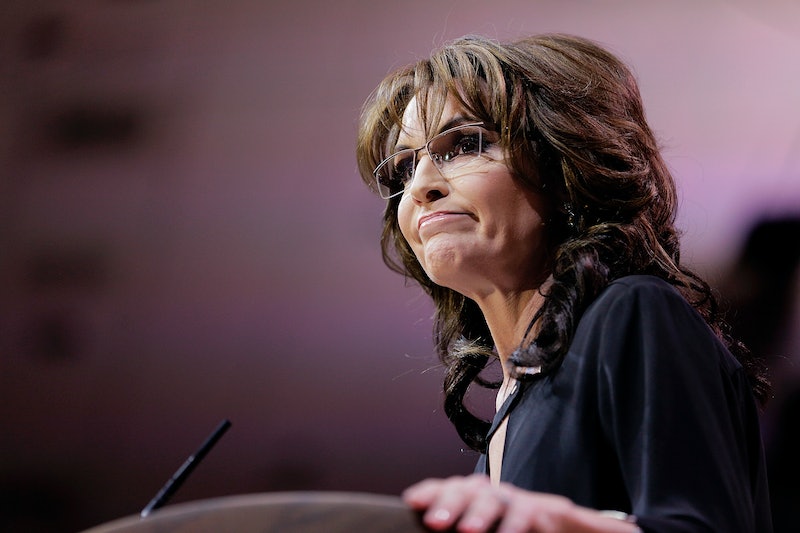 You know what's a pretty bad sign? When you give a speech so terrible, it does more to fire up your opponents than it does to rally your supporters. And sadly for one former Republican governor, that's exactly what happened in Iowa last week — Hillary Clinton's fundraising was boosted by Sarah Palin's speech at the Iowa Freedom Summit, a disastrous 33-minute ramble of folksy anecdotes, flat-falling applause lines and scattered asides. In other words: ouch, ouch and more ouch.

Palin's attendance at the Iowa Freedom Summit was probably intended as a reintroduction of sorts, with rumors about the 2016 GOP presidential field swirling. She was joined by attendees like Mike Huckabee and New Jersey Govenor Chris Christie, who're thought to be more seriously considering a run at the White House, but Palin herself tried to get her name in the mix in advance of the speech, telling ABC News that "of course" she was interested in running. Whatever warm reception she was hoping to capitalize on, however, did not materialize — her subsequent speech was widely ripped up, derided and dismissed not just by the left, but by many on the right as well. Even conservative writer Matt K. Lewis, who authored a book of Palin quotations back in 2011, was forced to concede he'd missed Palin's deep, unyielding flaws as a candidate.

But not everybody was left with a bad taste in their mouth. Quite the contrary, Hillary Clinton probably owes Palin a thank-you note after the awkward appearance. According to The Independent, the Ready For Hillary PAC raised nearly $25,000 on the back of Palin's speech, which directly (and ineptly) attacked the presumed Democratic frontrunner as an "old Democrat," with ace lines like these.

Now, the press asks, the press asks “can anyone stop Hillary?” Again, this is to forego a conclusion, right, it’s to scare us off, to convince that — a pantsuit can crush patriots!?

Basically, it was a crafty bit of borrowed political messaging by the Ready For Hillary PAC — in the course of her speech, in an effort to emphasize that yes, she and the GOP are ready for Hillary, Palin held up a car magnet bearing that same phrase. The PAC threw that image up on their website, promising to send out similar car magnets to anybody who kicked in some cash. And that's not all — they celebrated the occasion with a jovial, trolling post declaring Palin a fundraising co-=chair on the strength of her efforts.

Yesterday, we sent an email to our supporters telling you how Sarah Palin held up a Ready for Hillary car magnet during a recent speech. The response we got was overwhelming — hundreds of supporters stepped up and Sarah ended up raising Ready for Hillary over $25,000 in grassroots donations. Here’s the kicker — by raising $25,000, Sarah officially qualifies as a Co-Chair of our National Finance Council.

It may not be the most significant amount, there's no denying that — Hillary is undoubtedly the dominant fundraising force in the Democratic Party right now, and that $25,000 will be just a drop in the bucket amid the millions she'll be raking in and spending. But, all the same, it's got to stick in Palin's side a little bit. In the world of politics, a inflicted wound is bad enough. Scoring an own-goal for your opposition, however, is something altogether different.