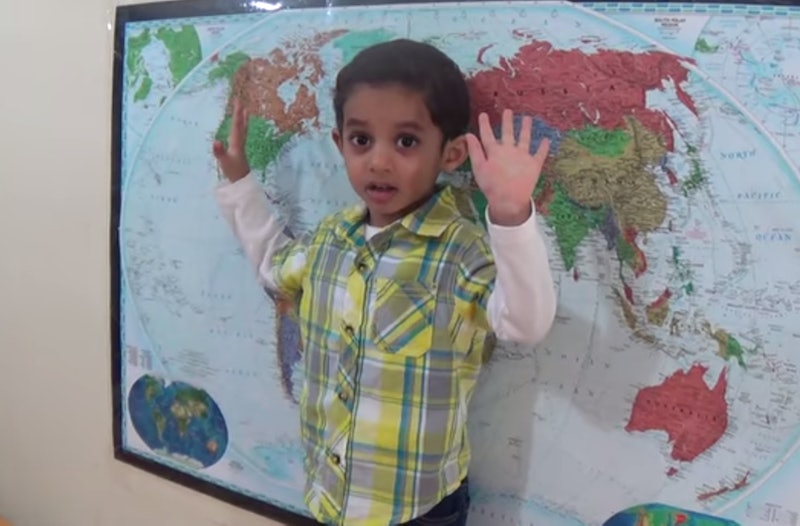 Think back to all the thoughts you were having when you were two years old. Hard, isn't it? Literally all I can remember about that year was having a massive meltdown in a crosswalk because I didn't want to hold my mom's hand when I crossed the street (I was a gem to raise, by the way). I'm guessing that most of us have hazy memories of those times, but that's because most of us weren't this two-year-old who has memorized the location of every country on the world map, and can pick them out with astonishing speed.

While you were still struggling with what direction to point your iPhone to direct you to the nearest Starbucks, little Vihaan Chamala of New York has memorized all 202 countries, dependencies, and territories, and is able to recite them in four minutes and forty-two seconds. And he accomplished all of that in a mere two months, managing to set a world record before he even got to kindergarten. What I'm really trying to say here is that he is my new hero and I will never complain about all the information I had to cram into my head during college finals ever again.

I'm just floored he can keep his focus for that long as his mom fires off countries at him with impressive speed. If this is any indication of the massive amounts of information he can retain in his brain then I think we're looking at a future spelling bee and Jeopardy champ right here. At the very least, he's going to slay in every social studies class he takes. Vihaan and his very supportive family hope that the video of his insane world map skills will inspire children all over the world, and I sure hope it does, because it's too late for the rest of us to achieve this level of awesome at his age: