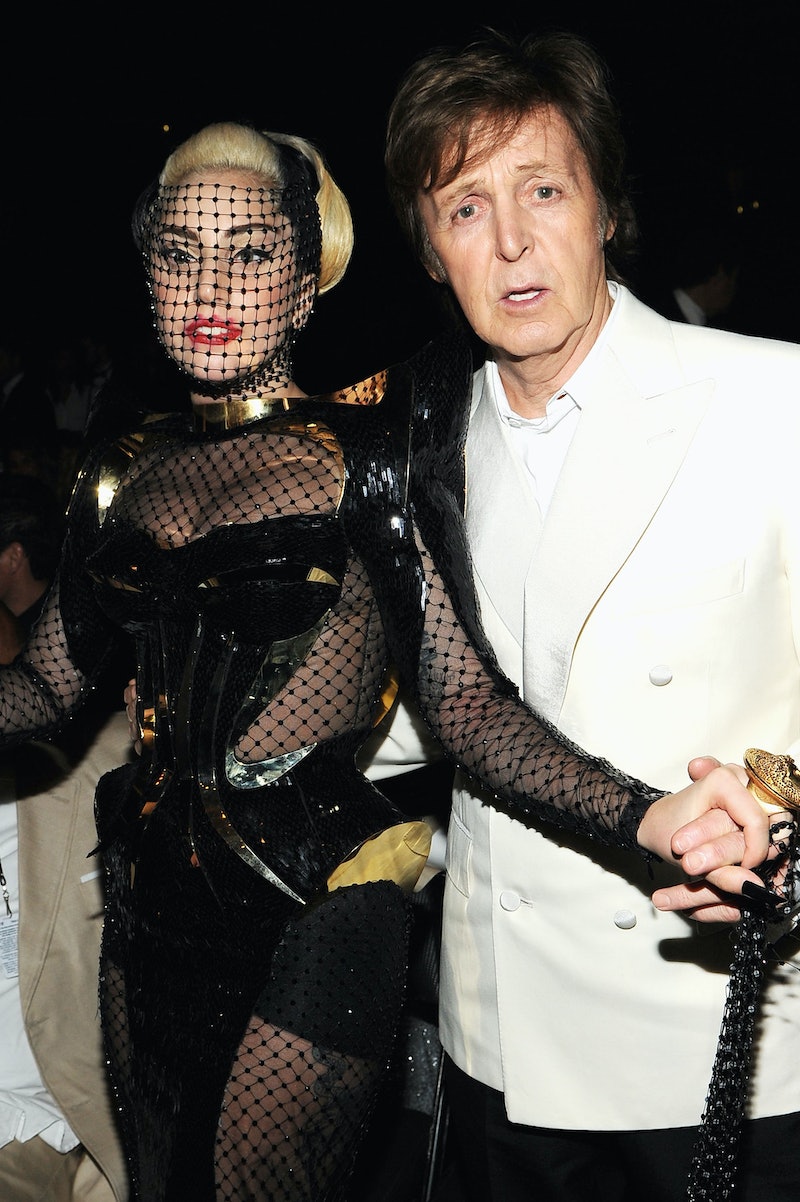 We are entering a new era of music featuring one transformed Beatle. Lady Gaga and Paul McCartney are collaborating on new music together, just on the heels of his big-time team-up with Rihanna and Kanye West for "FourFiveSeconds." Gaga announced the news on Instagram with a photo of them with a big group of musicians in the studio, writing, "Had a beautiful session with Sir Paul McCartney and friends. Working on one of his many secret projects! Killer musicians, vibe, and lots of laughs." She followed up with a second photo of just them, telling a story about how she thought she was a victim of a prank call when he asked her to work with him. "Always a good time with my buddy," she wrote. "I'll never forget when he called me last year to work and I hung up the phone cuz I thought it was a prank!"

Considering that this is McCartney's second huge collaboration in the past month, it seems to hint that he's taking his career in a new direction and reinventing himself. He will always be known for his incredible music with The Beatles and his solo career afterward, but associating himself with current pop stars could make for an unforgettable next record. He isn't selecting all in one genre, so I wouldn't be surprised if we see a collab with Taylor Swift next, then Beyonce and Jay Z, and then... One Direction? That may seem like a long shot, but McCartney did praise Harry Styles & Co. not too long ago.

More like this
The Best Memes & Tweets About Lady Gaga Reportedly Joining 'The Joker' Sequel
By Grace Wehniainen
Everything To Know About The Musical ‘Joker’ Sequel – & Lady Gaga’s Role
By El Hunt
Taylor Swift's “Carolina” Theme For 'Where The Crawdads Sing' Soundtrack Is Here
By Jake Viswanath
What Is Elvis Presley’s Net Worth? How The King Earned & Spent His Fortune
By Grace Wehniainen
Get Even More From Bustle — Sign Up For The Newsletter