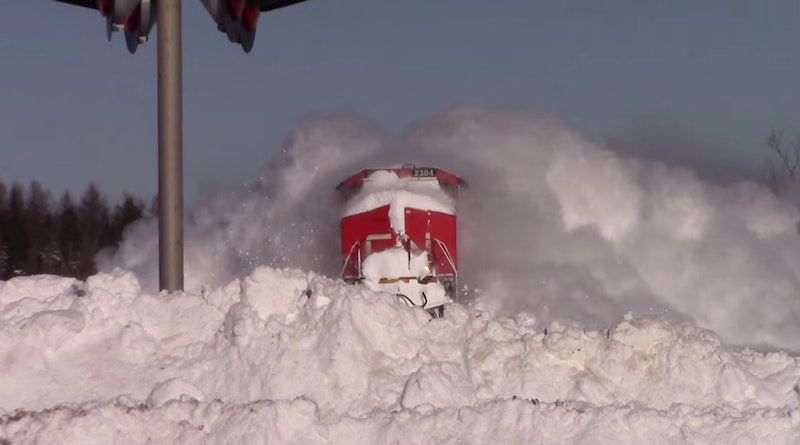 I want you to channel your inner Big Sean for a moment here. If you've been listening to the radio lately, you've probably heard the hilariously bleeped out version of "I Don't F*ck With You," in which Big Sean declares, "I don't give a [awkward silence], I don't, I don't, I don't give a [more awkward silence]". Well, nobody has achieved such a beautiful personification of that song than this train plowing through several feet of snow like it isn't even there. It's basically the transportation version of your middle school crush passing you in the hallway ALL OVER AGAIN.

If trains could talk, I'm pretty sure this one would only have one thing to say: "Ain't nobody got time for this snow." While we were all scrambling over our delayed and canceled flights from last week's Snowmageddon, trains were evidently evolving into straight up bulldozers. Way to get the job done, guys. This one in particular was filmed by a cameraperson that we all need to have a quiet moment of respect for, because he got a hundred percent sloshed by this train's snow spit as it passed him and he just kept on keeping on so he could deliver us this mind-blowing (and dare I say, empowering?) footage:

Before you get wrapped up calling this train the undisputed Master Of Snow, you should know that there is a challenger on the horizon, and this being happens to be sentient. His name is Rudiger, and he doesn't just take on the snow—he kills it with his bare hands. And he is more determined to free his entire household of the snowbank in front of their door than you are to open a tightly-shut jar of Nutella:

So who's the most badass? Train or cat? For your reference:

I personally can't decide. The only thing I know is that this train and cat accomplished more in those few seconds than I possibly will all year.