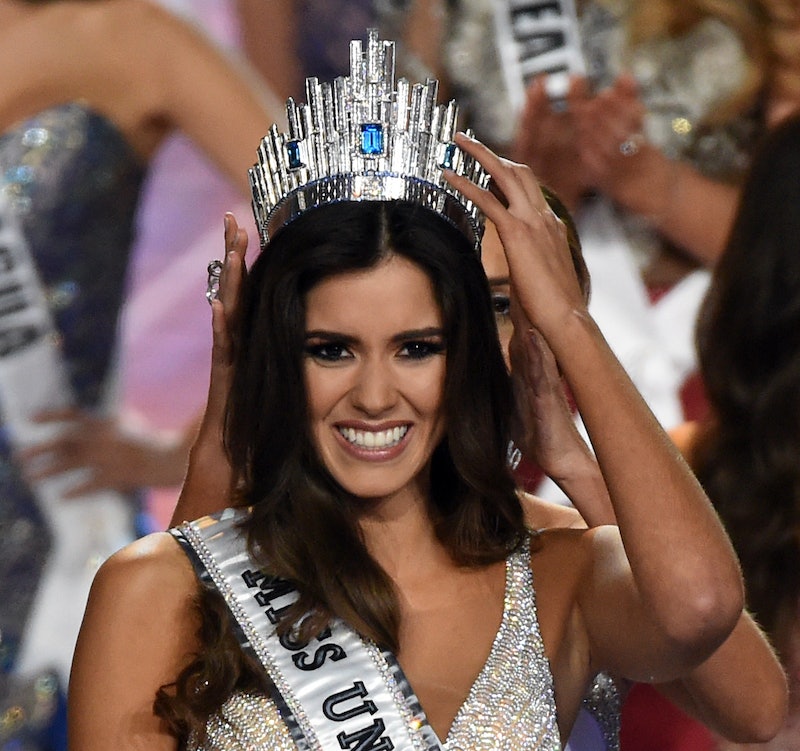 Typically seen at parties, charity events, and press conferences, beauty queens aren't always known for having a direct hand in political affairs. But that might soon be on the agenda of one pageant winner — Colombian FARC rebels invited Miss Universe to peace talks with the government, possibly earning her the new role of peace negotiator.

The newly-crowned Paulina Vega, who is a native of Colombia, had previously expressed in interviews during the Miss Universe competition that she was willing to attend the negotiations between the leftist FARC rebels and the Colombian government in Havana, Cuba. The rebels, also known as the Revolutionary Armed Forces of Colombia, took her up on the offer, extending an invitation on Saturday for her to join the talks. A statement on the FARC website said:

We have read with interest your desire to contribute with your good works to reaching peace. We salute your willingness to travel to Havana, at this time we invite you to make a trip to exhibit the development of the process of talks.

The 22-year-old model and business administration student was named Miss Universe on Jan. 25 in Miami. Though she hasn't responded to the invitation, the rebels stressed that her input is valuable:

Rest assured that there is complete willingness to respond to your concerns and to value your opinions as a valuable contribution to peace.

And it very well could. In a country where the rebels are largely reviled and beauty queens revered, an endorsement by Vega might be the missing piece in the puzzle that could put an end to 50 years of fighting. Both sides have been working toward a peace deal for the past two years, though negotiations are now mired in a deadlock.

Since its start in 1964, the conflict has killed some 220,000 people, most of whom were civilians, and displaced nearly 6 million more. Despite continuing to champion leftist causes, the rebels have been accused of bombings, murders, kidnappings, and extortion. Both the U.S. and the EU consider FARC a terrorist group.

So far, the talks have seen both sides agree on three of five agenda points — land reform, an end to the illegal drugs trade, and political participation for ex-guerrillas, according to the BBC — but a final peace deal remains elusive. The Guardian reported that a recent public opinion poll showed only a slight majority — 47 percent — of Colombians believe a peace accord will be reached, while 44 percent don't.

If Vega ultimately agrees to attend the talks, it will surely be a PR coup for her, too — how many beauty queens (whose repeated wishes for "world peace" have become so predictable) actually do get the chance to participate in talks of such nature? As FARC noted in its statement, the invitation included the goal of informing Vega "about the development of the negotiation process, its progress and the contributions that you and the great majorities who wish for peace can offer."