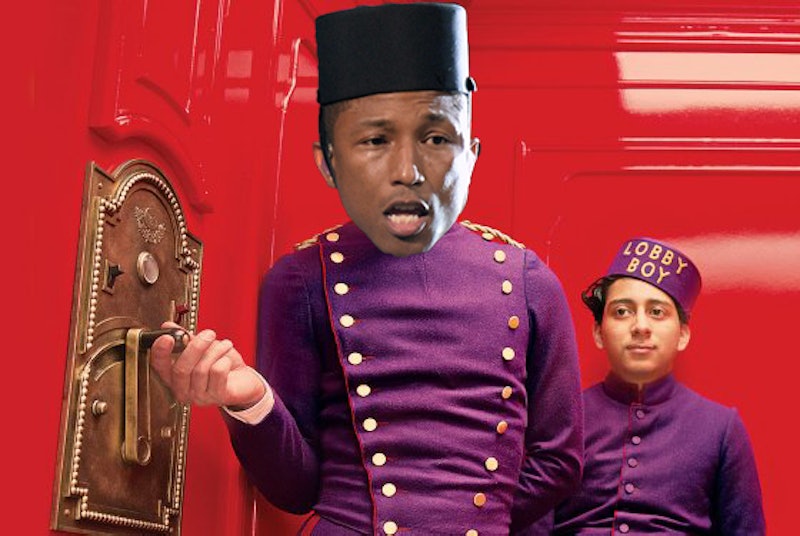 I'm gonna say it right now: Pharrell's "Happy" performance at the 2015 Grammys was straight up genius. Why did he have to subject us all to a whole year of hearing it on repeat before introducing this new, awesomely creepy minor-key version?! Even better, however, than the spoken word rendition of 2014's hottest earworm was Pharrell's Wes Anderson-esque outfit. Last year it was the Vivienne Westwood hat; this year Pharrell's encouraging us all to just say no to pants by rocking two shorts suits — one for the red carpet, and another for his musical performance.

I mean, really, Pharrell's so freaking talented that he can wear whatever the heck he wants, but everyone was pretty much in agreement that his ~style inspo~ for the night was probably the bellhop from Grand Budapest Hotel. And why not? The film is fantastic, and up for about a million awards this season. Maybe we should all be taking real life fashion inspiration from even more of Anderson's films. Who wouldn't want to dress like Margaret Tenenbaum every single day? I'm definitely guilty of going out and buying more knee high socks to channel Suzy after my third viewing of Moonrise Kingdom.

OOOOH and those shoes. THOSE GLITTER SHOES.

Oh. Whatever. It's true.