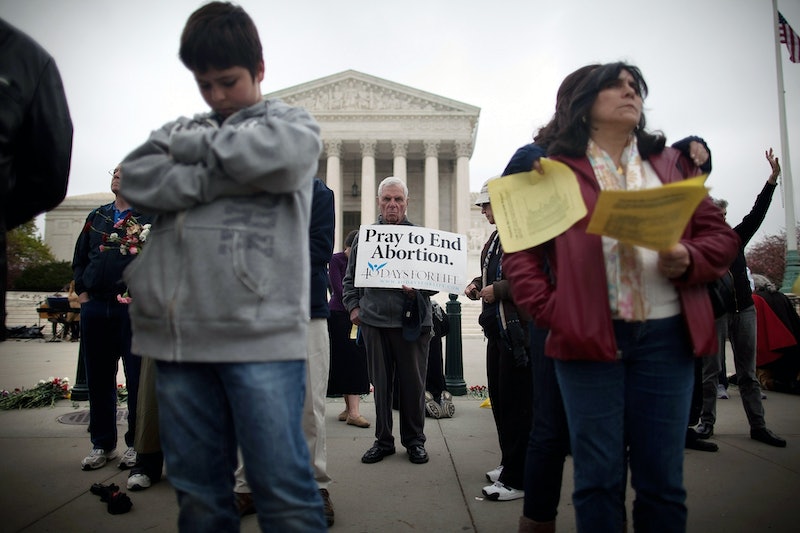 Pro-life activists are decidedly less than pleased with the way things are going in Washington, D.C., according to a Gallup poll conducted in January. After surveying a random sampling of 804 adults aged 18 or older, researchers found that only 34 percent of Americans approve of current U.S. abortion policy — that's the lowest number since 2001. In three of the last four years, approval numbers remained stagnant at just under 40 percent with only 2013 breaking the trend at 44 percent.

Gallup attributes the decreased numbers to a generally gloomy conservative outlook that has permeated the political scene since President Obama's 2012 re-election. Since then, no more than 29 percent of Republicans have been happy with national policies. That number dipped eight points to a new low of just 21 percent this January. Democratic numbers have largely remained around 50 percent since 2001, while Independents and Republicans, who had previously polled about the same, have split dramatically in recent months, with Independents hovering a full 15 points above their conservative counterparts.

What specifically caused the widening gap between the parties? Gallup researchers reported that those who had answered that they were dissatisfied with current abortion policies "were asked a follow-up question to learn if they [were] dissatisfied because they wanted current abortion laws to be stricter or less strict." According to 2015 numbers, twice as many respondents said that they preferred stricter rather looser policy (around 24 percent, as opposed to 12 percent in 2014).

Those numbers might change, if reigning conservative voices in Washington have their way. After a November midterm election sweep, Republicans managed to take over nearly 70 Congressional chambers, leaving no doubt in anyone's mind that they would introduce monumental abortion policy changes on the House floor.

Already, the GOP has introduced a handful of unpopular ideas, including one abortion bill that was retracted after certain specifications that would ban all abortions after the 20-week mark, including those of rape and incest victims. The measure caused a splinter within the party and prompted the bill's sponsors to amend their legislation before re-introducing a few days later. (The bill was introduced after the Gallup survey had been conducted and had no bearing on the results.)

Taking matters into their own hands, several states have been enacting legislation that would tighten restrictions on current abortion clinics and providers, including one proposed bill in Missouri which forces pregnant women to watch a graphic video prior to the procedure, which the bill's critics say will shame and intimidate women into canceling their appointments or not going through with them. The proposed legislation follows a move by Missouri state legislators who forced through a mandatory 72-hour waiting period last September.

If House Republicans have their way, the latest Gallup approval ratings will be nothing but a drop in the bucket: Already, pro-life legislators in South Dakota, Oklahoma, and Kansas have pushed through to committee several identical bills draped in emotionally charged language like "fetal dismemberment" and "decapitation" — it won't be long before other states begin to catch on.