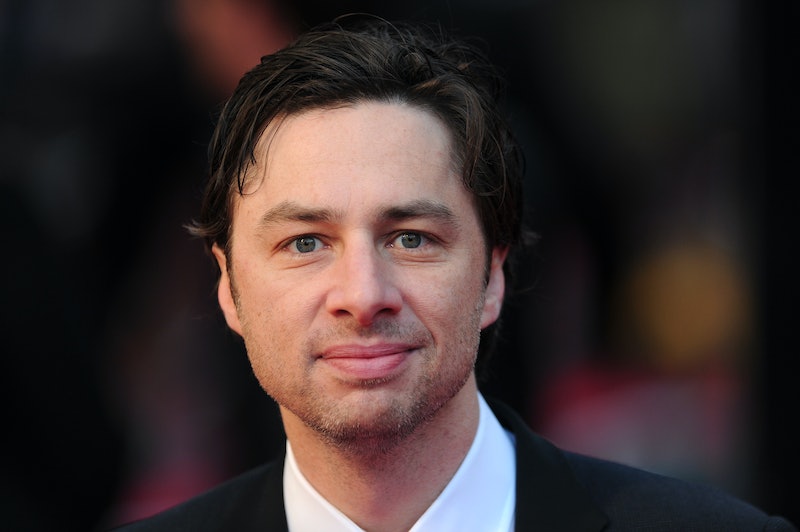 Wow. The 2015 Grammy Awards caused all kinds of controversy. No, I'm not just talking about that situation with Kanye West and Beck. I'm also talking about Zach Braff comparing Pharrell to a monkey — or that's what people assumed he was doing, at least. During Pharrell's "Happy" performance where he donned a bellhop costume, Braff tweeted a picture of a monkey in a bellhop outfit next to Pharrell in his costume. He has since deleted the tweet and has apologized with the following post: "I love Pharrell. I thought the outfit he wore was similar to that of my bell hop outfit in Oz. I apologize."

Well, as you can imagine, it caused quite a bit of controversy and continues to, especially since many found Braff's post to be extremely racist. As Braff states in his tweet, he thought he was being funny by comparing the outfit worn by the animated monkey he voiced in Oz the Great and Powerful to the one Pharrell wore during his performance. Braff learned the hard way that even if he didn't mean anything by it, he shouldn't post things that can be equated with racism.

Even if I don't think Braff meant anything by his tweet other than the outfit comparison, and I wholeheartedly believe in freedom of speech, there are some things that shouldn't be said and probably should be kept to yourself.

I could go on and on about how controversial Braff's tweet is, but I think most of us are all on the same page about that. So, let's talk about how Braff's tweet and subsequent apology is doing something far more important: opening an important discussion. In addition to those shaming or backing Braff for his actions, others are showing us why we still need to be extremely sensitive about what we're saying, writing, tweeting, and posting. Again, I'm all about speaking my mind and giving my opinion, which I'm doing as we speak, but there are some thoughts, feelings, and opinions we need to be cautious with. We all should think before we speak or write or tweet.

Even if this is 2015, there are still ignorant individuals (and, no, I'm not saying Braff is one of them) who continue to transport us back to a time when slavery existed, when others were mistreated because of the color of their skin, and when people were labeled with degrading nicknames. Unfortunately, not everyone has moved past such behavior.

Whether you see Braff's tweet as ignorant, an honest mistake, or a harmless comparison that he should be allowed to make, regardless of the actor's intention, the tweet itself did open up an important discussion and lead people to think about the reason why something like this might be offensive. And any amount of deeper thought that a place like Twitter can bring — especially about a topic some are scared to discuss — is a good thing.