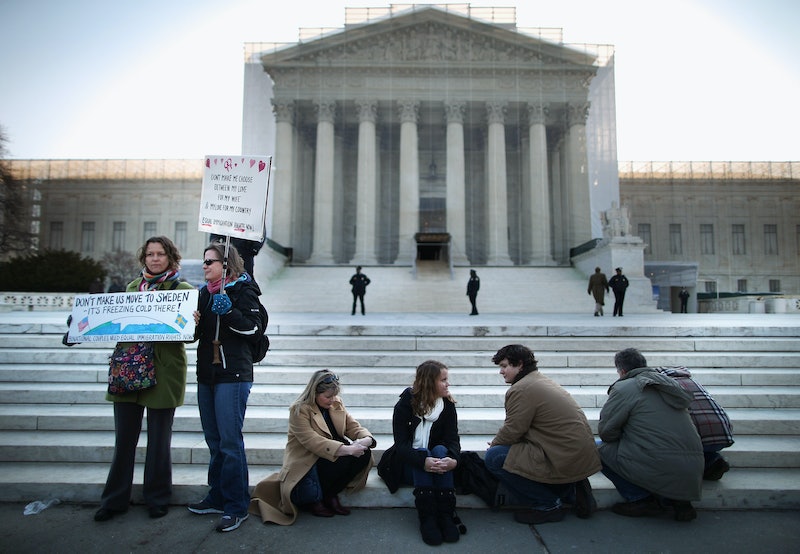 One step forward, two steps back seems to be the mantra in play in Alabama, where a minister was arrested after attempting to officiate a gay marriage. Despite the Supreme Court's decision to allow same-sex unions to take place, the southern state has remained mired in bigotry and has refused to allow a number of these couples to wed, proving that de jure and de facto equality remain separate entities, even in 21st century America. So opposed are some Alabama courthouses and officials to the notion of gay marriage that they have stopped issuing marriage licenses altogether, even to heterosexual couples. Apparently, gay marriage is such a threat to the institution that we must disallow weddings altogether. Good one, Alabama!

Proponents of marriage equality were given a brief moment of celebration on Monday when the Roberts Court upheld a federal judge's ruling that deemed the state's ban on gay marriage unconstitutional. But the rain was soon to follow on that particular parade Alabama Chief Justice Roy Moore decreed that probate judges were not to permit same-sex couples to be married. This is the same Roy Moore who similarly refused to follow federal orders when he kept a Ten Commandments monument in the state courthouse in 2003, an offense for which he was later removed from the bench. But history has a strange and rather unfortunate way of repeating itself in the south, and after being re-elected to Alabama's Supreme Court in 2012, he is back to his old, offensive ways.

But for every disaster in Alabama, there is an attempt at a good deed, which manifested itself in Anne Susan Diprizio, a 44-year-old ordained minister who attempted to wed a same-sex couple on Tuesday. When police officers asked her to leave the courthouse (which had been shut down so as to prevent the occurrence of any and all marriages), Diprizio refused, taking to her knees in a nonviolent protest. Strangely enough, when someone like Judge Moore decides not to follow a direct order, he manages to stop individuals in love from celebrating their relationships. But when a woman like Anne Susan Diprizio decides to take a stand (or in this case, a knee) against injustice, she is arrested for disorderly conduct.

Sheriff Joe Sedingert attempted to defend the decision to arrest Diprizio by telling ABC News that it was her attempt to perform a marriage at all, and not a gay marriage, that landed her in prison with a bail of $1,000, and a charge generally reserved for those causing a public disturbance. But as Diprizio noted to MSNBC, there was nothing disorderly about her conduct. Said the minister,

I will say I was nothing but polite...The only person who was behaving disorderly was [Autauga County Probate] Judge Booth, who was aggressive, rude, hateful, not gentlemanly, had no southern manners – nothing you would expect from a good man.

19-year-old Morgan Plunkett, one of the women Diprizio was attempting to join in matrimony, corroborated her story, telling reporters that Judge Booth "was livid,” and "started cussing her out." She continued, "He was telling us that we needed to leave, and that he had already called the sheriff," after the minister made it clear that she would be officiating a ceremony. While Plunkett and her fiancee Courtney Cannon left the premises after six officers (yes, six, to stop a marriage) arrived at the courthouse, Diprizio stood her ground, which proved to be an unacceptable act of defiance. Diprizio told MSNBC:

They were there to arrest me, so they did. I didn’t know what they were charging me with because I did not commit any crime. It says here ‘disorderly conduct’ [on the form for bond,] which is not true. It’s just a way to intimidate.

Sadly, this is not an altogether unexpected reaction from officials in Alabama, a state that is known for public officials like Gov. George Wallace, who proclaimed in the 1960's, "segregation now, segregation tomorrow, segregation forever." Five decades later, this same mentality of inequality has prevailed, and hatefulness seems to have remained embedded in governmental policies.

On Tuesday, some gay and lesbian couples sat outside the barred windows of courthouses across the state for hours, begging to be granted their right to wed. "Come on, you've got a federal court order. Open those windows," yelled Jim Strawser, who was there to marry his partner John Humphrey. But he received no answer, and now, the issue is headed back to the courts, continuing the circus over what should be one of the least contested rights known to 21st century Americans, regardless of sexual orientation.

Still, despite these lamentable situations, some gay couples were indeed able to celebrate their love, and hundreds of homosexual couples have now been able to marry across the state, particularly in larger cities. This makes Alabama the 37th state to observe legal marriages between a man and a man or a woman and a woman, and while the progress has been undeniably slow, it is still forthcoming. While only seven of the 67 counties in Alabama sold wedding licenses on Monday, this number grew to 17 on Tuesday, and is expected to rise as the week wears on.

If Alabama hopes to be remembered as anything other than one of the most backwards states in the union, it is of paramount importance that petulant, tyrannical bigots like Roy Moore are unable to ban individuals from marrying. This year marks the 50th anniversary of the Voting Rights Act of 1965, legislation that was famously contentious in the deep south and particularly in Alabama. While current Alabama governor Robert Bentley is by no means a particularly progressive man, as he has stated that he strongly believes that marriage is intended for a man and a woman, he has also noted that the matter deserves to be "worked out through the proper legal channels."

"I don't want Alabama to be seen as it was 50 years ago when a federal law was defied. I'm not going to do that," Bentley told the Associated Press "I'm trying to move this state forward."

Here's a hint, Governor. Start with allowing people to get married.