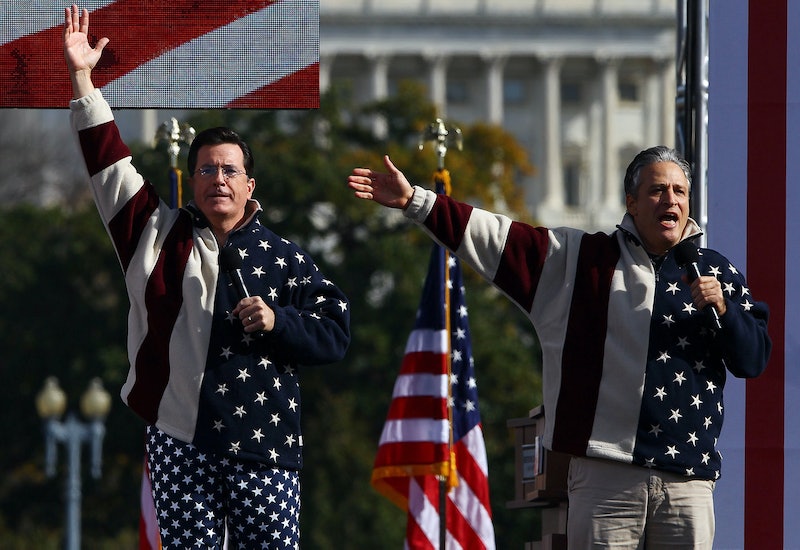 It's undeniable: Jon Stewart, and the franchise of Comedy Central late night personalities/shows that flourished around him, changed the way millions of people engaged with politics. Now that Jon Stewart has announced he's stepping down from The Daily Show, mere months after cohort Stephen Colbert wrapped up his run on The Colbert Report. There is a tangible loss felt with these changes, especially with something looming big, dark, and scary on the horizon: The 2016 presidential election. The Comedy Central block will remain, with Larry Wilmore on The Nightly Show and an as-of-yet unnamed successor helming The Daily Show — but, still, I can't help but mourn for the end of this particular era, especially given that we didn't know 2012 would be our last presidential election with this landmark team.

Politics are, perhaps by their very nature, alienating. It can be hard to find your entry-point, or to figure out how to keep yourself informed without coming out of it wishing you could stick your head back in the sand and unlearn everything humanity-in-politics had to show you. The Daily Show and The Colbert Report revolutionized that relationship, and, for me, they did it at exactly the right time: Right as I was growing up and becoming interested in engaging with that side of the world, there they were.

This was especially true during the lead-up to the 2008 election — a year that proved to be truly legendary, not only in that it led us to our first black president, but in the creation of so much late night comedy that perfectly encapsulated the era in politics. From The Daily Show and The Colbert Report to Saturday Night Live, everybody was on fire right then. And now that one of those three has closed up shop and another is promising limbo, we're all really gonna need the third to step up its game and fill that void.

Let's look back at that landmark era in political comedy. Everything, as usual, was ridiculous, especially in that specific 2008 era. But everything also felt heightened, in part because we were facing the possibility of our first female or first black president, and in large part because we were coming off of the supreme exhaustion of the George W. Bush era.

Comedy took the edge off while also telling us that, yes, we needed to (and continue to need to) pay attention to this, because our world was riding on it. Looking forward to 2016, a big chunk of that space is now up in the air. Colbert will surely address politics when he takes over The Late Show , but "Stephen Colbert" the character is gone, and so is his take on the world. I'm sure that whoever takes over The Daily Show will be more than capable, but one thing is for certain: They won't be Jon Stewart.

And so, in this time of upheaval, what I really hope if that SNL is readying itself. Because America is never less ridiculous than it is during an election year, and without the steadying comedic voices of Colbert and Stewart in their usual seats, we're really gonna need the sketch show to step it up.

SNL was, after all, an inexorable part of the iconicity of the 2008 election. Never forget that opening sketch with Tina Fey and Amy Poehler after Sarah Palin was announced as John McCain's running mate.

And who could forget Amy Poehler, rapping in Sarah Palin's place, pregnant belly bulging a week before she gave birth to her first son? That was straight-up legendary, and remains one of the greatest things I've ever seen.

SNL hit our culture hard that year, right alongside Stewart and Colbert. Most of the cast that made up the show that year's moved on now, but I sincerely hope they can convince Amy Poehler to come back as Hillary Clinton as often as is necessary — and I assume it's gonna be necessary a lot.

Stewart and Colbert may be stepping into different roles, but the demand for political comedy isn't going anywhere. I have full faith that John Oliver will deliver a lot of what we need on Last Week Tonight, but we need more than that. We need SNL back at the top of its game. Here's hoping they can get there.