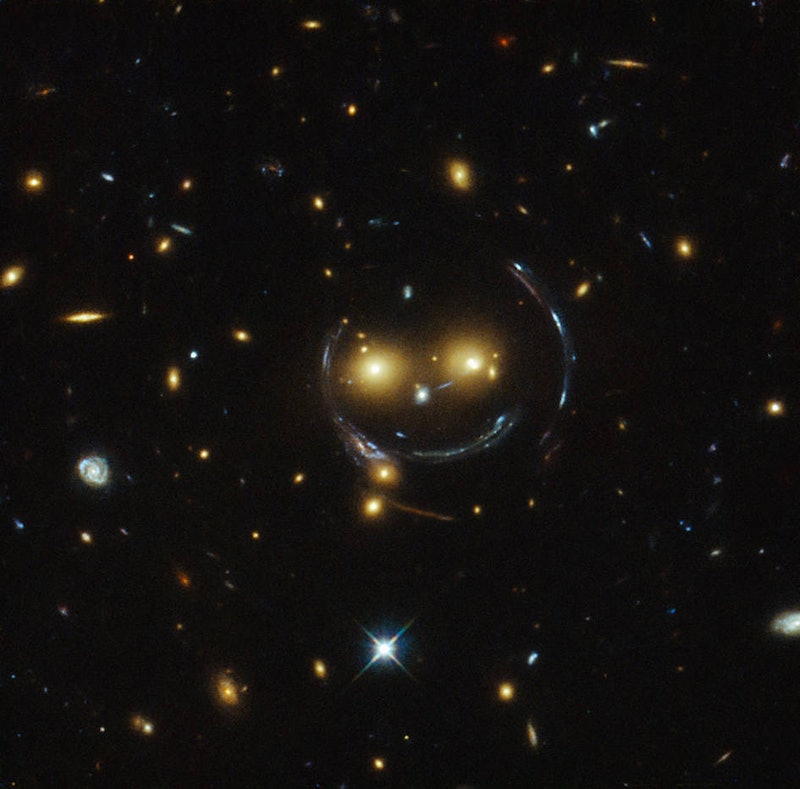 No offense to the big and little dippers, but this is way cooler. The Hubble telescope has captured a smiley face in space that looks just like a celestial emoji or, if you're from the Pittsburgh area, a cosmic Eat'n Park Smiley Cookie. Over the years, the Hubble Space Telescope has captured some breathtaking images that are literally, ahem, out of this world, from planets to galaxies to colorful nebulae, but this is hands down its happiest discovery.

Earlier this week, NASA and the European Space Agency confirmed the existence of this deep-space happy face and explained what made up each facial feature. According to them, the two bright, round eyes are the galaxies SDSSCGB 8842.3 and SDSSCGB 8842.4, the smile is formed by an effect known as strong gravitational lensing, which happens when massive structures in the universe warp the spacetime around them and act as lenses that distort the light behind them to form arcs or even circles, known as Einstein Rings. That would explain both the smiling mouth and the outline of the face.

This cheerful galactic face was first discovered in 2012 by Judith Schmidt, who entered the image in Hubble's Hidden Treasures contest. The competition asks aspiring astronomers and fans to scour Hubble's science archive for hidden gems that they think could become iconic space images. Schmidt chose the joyful image, processed it to make it pop, and submitted it to the contest.

Schmidt may not have won the competition back in 2012, but NASA and ESA have given her a reason to smile by releasing the image on their websites this week. The heavens may be a vast and mysterious place, but it's comforting to know that there's this happy little dude smiling down at us from there.