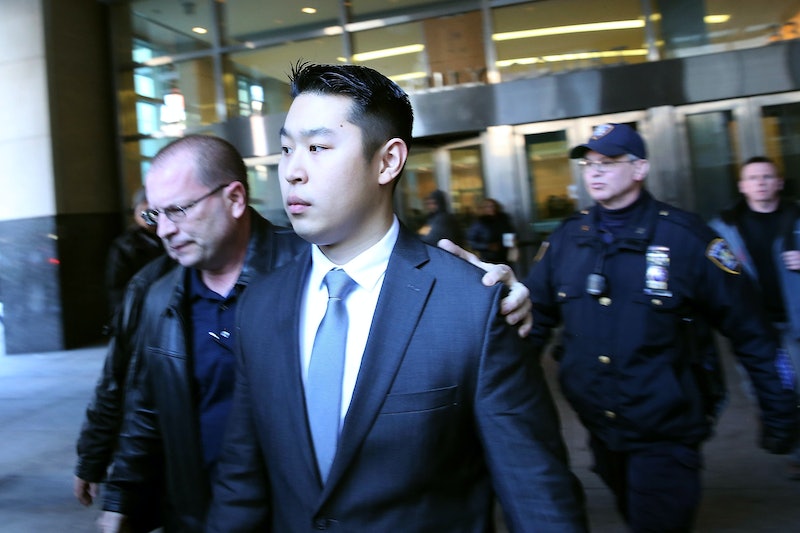 Considering recent events, Tuesday brought pretty surprising news: a rookie NYPD officer named Peter Liang was indicted for fatally shooting an unarmed black man. The lethal encounter took place back in November, in a darkened hallway inside the notoriously poorly maintained Pink Houses project in Brooklyn, and it left innocent 28-year-old Akai Gurley dead — yes, innocent, and even NYPD Comissioner Bill Bratton has admitted as much. So, what will the jury rule on Akai Gurley shooter Peter Liang?

Liang, 27, made his first appearance in a New York courtroom today, pleading not guilty to the charges he was indicted for Tuesday. Now, in the run-up to the trial, you can expect to hear relevant new details about just how this awful situation unfolded — both according to the NYPD and Liang, as well as the prosecutors who'll be trying the case.

Liang's contention, and that of the department, is that the shooting was purely accidental, a physical mishap that allegedly occurred when Liang was fumbling with a doorknob with his gun in the same hand. Conversely, prosecutors are arguing that he had his finger on the trigger while the weapon was drawn, in violation of NYPD procedure. As Assistant District Attorney Mark Fliedner said, according to CBS News: "The defendant ignored this training. As a result, Mr. Akai Gurley is dead."

So, what legal outcomes might Liang face here? Easily enough, this is one where it's pretty much an up-or-down proposition, conviction or acquittal. What would ultimately happen to him in either case, however, is yet somewhat uncertain.

He's Convicted, And Faces Quite A Few Years

If the jury decides to convict Liang, he could be in for a lengthy spell in prison. As detailed by the New York Observer, Liang was charged with two counts of professional misconduct, and one count each of second-degree manslaughter, second-degree assault, criminally negligent homicide, and reckless endangerment.

He's Acquitted, And People Will Be Furious

Given the wealth of information in this case that cuts against Liang and towards a conviction of some level, regardless of how severe, it seems impossible to think that the jury would walk away acquitting him on all charges. The fact that the grand jury was sufficiently motivated to indict Liang speaks to this, as well — given how incredibly rare indictments of police officers are, it speaks to a case's strength in a big way if it makes it to trial (even though Eric Garner's case still makes no sense).

But if the jury somehow does decide to acquit Liang, make no mistake, it'll instantly vault the story — and the name Akai Gurley — into the same stratosphere as the names Eric Garner, John Crawford, Michael Brown and Tamir Rice. There's also no telling what an acquittal would mean for Liang's career at the department, which is obviously relevant. In spite of the legality of it, given the incredible dearth of trust and goodwill he'd be operating at with countless members of the public, it seems doubtful that he'd have much of a future with the NYPD, even if he managed to duck all legal consequences. In fact, according to Fliedner, that's the very thought Liang voiced after the shooting: “I’m going to be fired.”