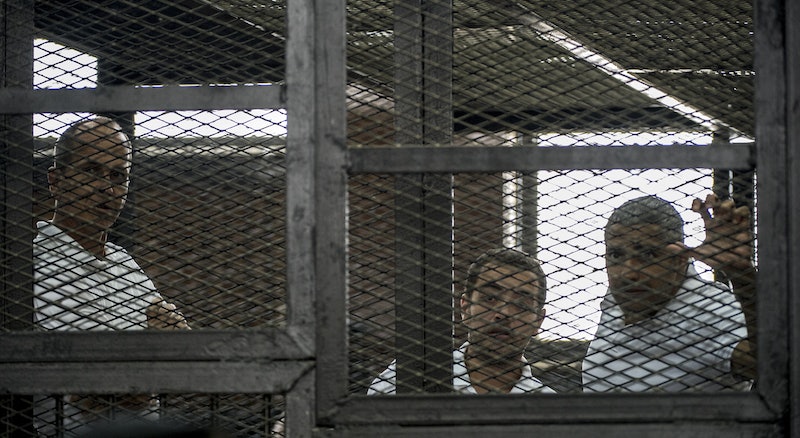 After a year in prison, two Al Jazeera journalists were freed by an Egyptian court on Thursday. The journalists, Mohamed Fadel Fahmy and Baher Mohamed, were initially found guilty of working in collusion with the Muslim Brotherhood and broadcasting false news as they reported on the heated overthrow of former Egyptian President Mohamed Morsi in 2013. Fahmy and Mohamed were released on bail as they await a retrial of their case.

Fahmy and Mohamed's June 2014 convictions were overturned in January by Egypt's Court of Cassation. The next hearing for their retrial is Feb. 23, and their employers are looking for an acquittal. "The focus though is still on the court reaching the correct verdict at the next hearing by dismissing this absurd case and releasing both these fine journalists unconditionally," an Al Jazeera spokesperson said Thursday on the news outlet's website.

Fahmy and Mohamed were originally tried alongside journalist Peter Greste and seven other colleagues. Fahmy, Mohamed and Greste were all accused of reporting false news, allegedly working in conspiracy with the Muslim Brotherhood. The three journalists were sentenced for between seven and 10 years each. Mohamed also received an extra three years on his sentence for allegedly possessing ammunition.

Greste was recently released, having been retried and deported back to his native country of Australia. Fahmy and Mohamed remained detained, having been away from their families for more than 400 days, according to Al Jazeera. The news company, which is based in Qatar, called Fahmy and Mohamed's release on bail "a small step in the right direction."

The journalists were arrested in December 2013 after Egyptian police raided a Marriott hotel room that was serving as a makeshift Al Jazeera studio. The evidence presented at the trial was vague and seemingly irrelevant: The New York Times reported at the time that prosecutors presented photos from a Greste family vacation. The Guardian added that prosecutors also cited a Goyte song, video from a press conference in Kenya, and a news video report about sheep as evidence.

Last June, Al Jazeera claimed the verdict "defies logic" and maintained the journalists' innocence. "There is no justification whatsoever in the detention of our three colleagues for even one minute," Al Jazeera said at the time. "There is only one sensible outcome now. For the verdict to be overturned, and justice to be recognised by Egypt."

Greste, who traveled back to Egypt to attend Thursday's hearing, tweeted his support for his Al Jazeera colleagues.