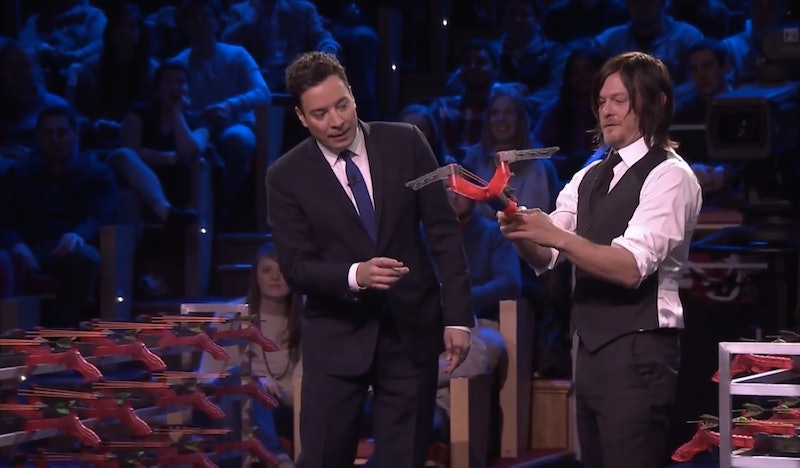 We all know it's true: Norman Reedus + crossbow on The Walking Dead = OTP and total kryptonite for all those pesky zombie walkers. I'm pretty sure that knowledge is so common, in fact, that you don't even need to be a Walking Dead fan to know it's true — Reedus is just such a total badass on that show that it's come a fact of the world, like the sky being blue, or burritos being delicious. That said, who knew the dude was as much of a badass off set with a crossbow as he is on set with one? (Well, I did, but I have Norman Reedus obsession issues.) Now, you do!: During an appearance on The Tonight Show , Norman Reedus showed off his crossbow skillz during a friendly game of "Facebreakers" with host Jimmy Fallon, and I don't thing I need to tell you that the clip is a total must-see.

Basically, here's the point of the game: Reedus had to shoot crossbows at painted pictures of Fallon's face (I promise it's not as violent as it sounds), and Fallon had to do the same with pictures of Reedus' face. Whoever hit the most pictures won — and, though I won't spoil the outcome of this competition for you because spoilers = lame, I will say that the answer is totally obvious when you consider that Reedus has been totally training extensively with crossbows for a while now.

Anyway, what are you waiting for? There's pretty much no better way to celebrate Valentine's Day than by watching a man and his crossbow be total OTP on late-night television. Check out the clip below.