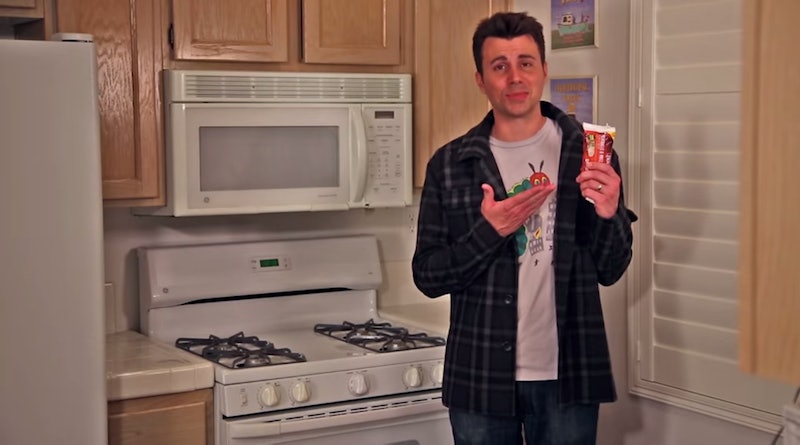 We’ve all dealt with the inevitable downside of eating microwaved food: When you pull it out, it looks piping hot and ready to eat. But, a few bites in, you find that food you thought was perfectly warmed is actually unappetizingly cold in the middle. Thanks to a new microwave invention though by former NASA engineer Mark Rober, that problem might become a thing of the past. He has developed a microwave prototype called the Heat Map Microwave that lets you see whether food is evenly heated.

So how does it work? The infrared microwave has a camera attached inside that monitors the food while it cooks, and a display screen on the door shows the food changing color as it heats up. When the food is cold, it’s blue. As it starts to heat up, the color transitions to red. When the food’s color switches from red to white, you’ll know that your food is heated thoroughly throughout. Rober — who has worked on other important endeavors, such as the Curiosity Mars rover — comments in a video:

It’s really hard to guess the cooking time on a frozen burrito. Basically, unless you stop the microwave and pull your food out to inspect, there’s no way to tell if it’s done just right. So as humans, we rely primarily on our sense of sight. So it would be so much better if we could be like the predator and just glance over and see the temperature of our food to tell if it was done, and the amazing news is that is possible now.

Unfortunately, this brilliant microwave invention is not yet on the shelves. Right now, Rober is asking people to sign a petition to help spread the word. So far, he’s patented the invention and even has potential plans to create a smartphone app to monitor your food’s temperature remotely.

Someday, heating up frozen food might just get easier. But, thankfully, Rober also has some microwaving tips until his invention makes it off a website petition and onto store shelves and our kitchen counters. According to Rober's series of tests that went into the creation of this microwave prototype, the best way to tell if food is warm on the inside is to make sure the food is evenly heated on the outside, Gizmodo reports.

Who knew microwaving food could be so scientific?