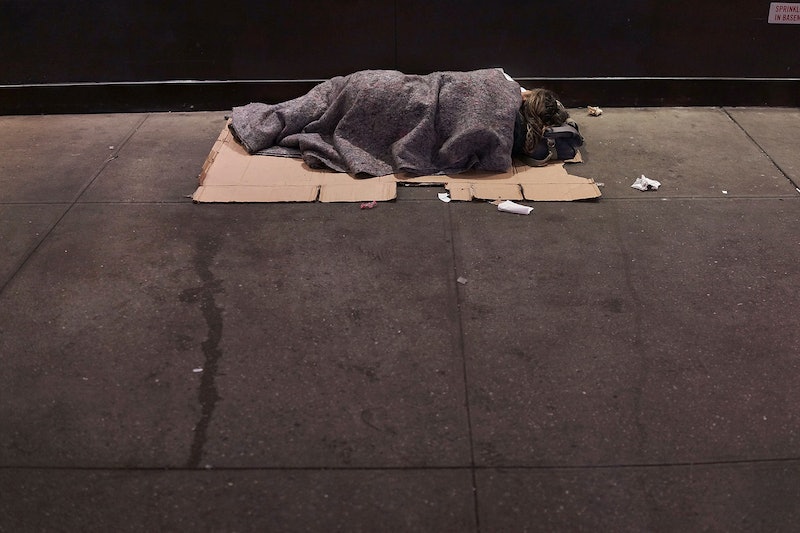 In March 2014, a homeless woman was asleep under a bridge in Columbus, Ohio, when a 54-year-old man physically assaulted and raped her. Her attacker, Paul Hubert, was sentenced to three years in prison, having plead guilty, on Tuesday — but not without first facing the homeless woman, who reportedly walked about 8 miles to see him court.

According to The Columbus Dispatch, the homeless woman, whose name hasn't been released, was determined to see her rapist in court, but having been homeless for roughly two years, she had very little money and relatively no access to transportation. It's about 8 miles from where the woman was living in the Whitehall neighborhood of Columbus to the the Franklin County courthouse — an exhaustive journey for anyone who's not a marathon runner. But on more than one occasion, the 47-year-old woman walked the full 8 miles.

Over the last 11 months, the woman attended about six court hearings, The Dispatch reports. She walked to the courthouse for at least two of those hearings, traveling those 8 miles on foot for about three hours each way. For the other court appearances, the woman panhandled strangers for money to purchase a bus pass, or received a pass from prosecutors at the courthouse.

Each time the homeless woman arrived at the courthouse, it was a shock for Hubert. "He was counting on her not showing up," Columbus police detective James Ashenhurst told The Dispatch. "If it wasn’t for her cooperation, he would have walked."

When asked why she made the journey on foot the courthouse, the woman told the news source she wanted justice. "If he would do that to me, imagine what he might do to his next victim," she said.

According to the Associated Press, Assistant County Prosecutor Michael Hughes told the woman's determination and cooperation, which in turn helped them prosecute Hubert for his crime. "Not in every case do we have people who show this kind of resolve," Hughes said in court.

Homeless women, especially those who've been living without permanent shelter for the long term, are largely at risk for rape and sexual assault. According to a study from researchers with the National Online Resource Center on Violence Against Women, homelessness "dramatically increases" a woman's risk of being sexual assaulted or raped, and activities such as panhandling place homeless women at further risk of being a victim of sexual violence. Homeless women with a history of mental illness perhaps have the highest risk, researchers noted, with one study finding that 28 percent of the homeless and mentally ill women surveyed were sexually assaulted in the last month.

Most importantly, a majority of homeless women don't have their sexual assaults reported to police, primarily out of fear or distrust of authorities, or a lack of access to resources and victim rights advocates. For the homeless woman in Columbus, her story is not only memorable for her walking 8 miles each way to the courthouse — it's remarkable that justice was served at all.