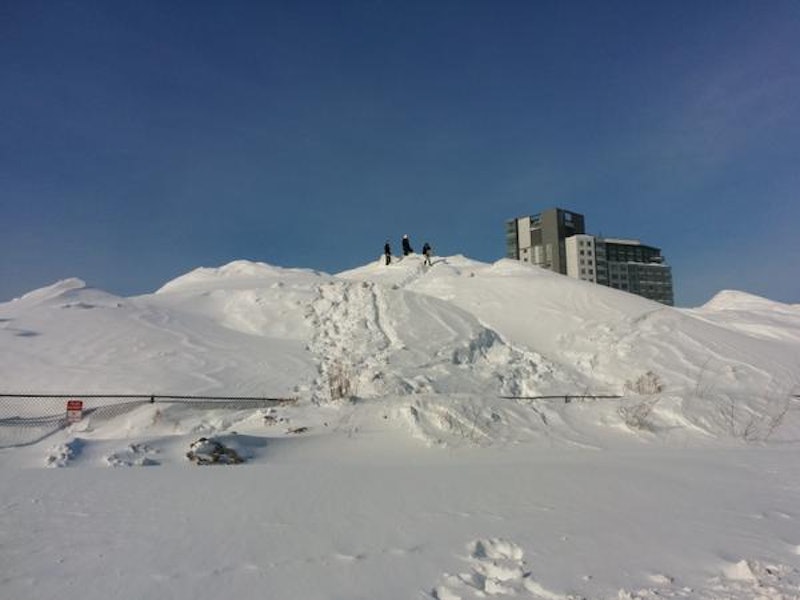 In case you haven't heard, the Boston area has had record-breaking snowfall over the last 30 days, placing the city in a shoulder-deep blanket of white. The winter snowstorms aren't over yet, either: Weather forecasters are predicting more snow for the New England city later this week, because 7 feet of snow over three weeks just isn't enough punishment for the Patriots winning the Super Bowl. But at least some students at Massachusetts Institute of Technology are having fun with it, commandeering their very own five-story snow mountain called the Alps of MIT.

A gigantic snow mound on the MIT campus has been forming over the last few weeks, accumulating to what the university says is five stories tall. The area was initially being used as a "snow dump," but has since turned into a winter sports resort for students and Cambridge, Massachusetts residents.

Dubbed the Alps of MIT — or the less clever MIT Snow Mountain — the astounding five-story mound is now the site of sledding, skiing, mountain climbing, and then some. "They [students] have mostly been sledding, but I saw someone with downhill skis on it just the other day," MIT student Carolyn Holz told The Boston Globe, adding that the Alps of MIT is a "hill for outdoor activities."

Of course, many brave Boston folks have ventured through the snow trenches to see the Alps in person. And yes, really, this is Boston you're looking at...

More like this
Michigan’s Governor Is “Going To Fight Like Hell” To Protect Abortion Access
By Andrea Zelinski
What To Know About Taking More Than 1 Piriteze Per Day
By Bustle UK
The 6 Best Balaclavas To Keep Your Face, Head & Neck Comfortably Warm
By Jenny White
How To See The Lunar Eclipse On May 15-16, 2022
By Kaitlyn Wylde
Get Even More From Bustle — Sign Up For The Newsletter