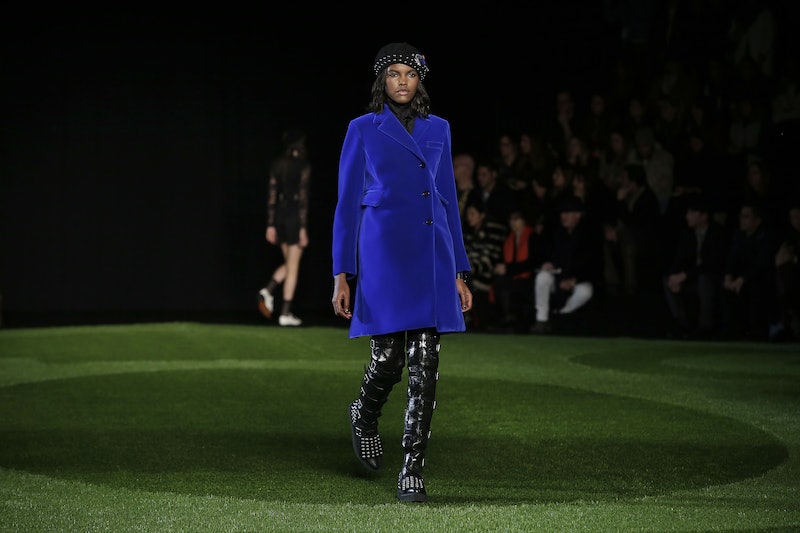 Big life events, like weddings, giving birth, getting engaged, buying a house, nailing a job interview, nabbing a scholarship or, you know, walking the Marc by Marc Jacobs runway are nerve-wracking, somewhat harrowing and thrilling experiences. The models at the Marc by Marc Jacobs show shared their pre-runway texts and they are surprisingly normal and totally adorable. The texts are pretty much like what you'd text your friends and family prior to a big event.

This video shoots to hell the notion that models can't do anything but sit in makeup chairs and be sewn into clothes during Fashion Week. They are real people with real nerves about their real jobs, despite the general fabulousness that surrounds them.

Vogue notes that backstage at Pier 36, mere moments before the show kicked off, the models were much like the rest of us. That is, they were clutching their phones and communicating with loved ones! Yes, I'd expect them to be teasing the action with tweets or Instagram photos, but instead they were pretty much revealing the emotional stages or getting ready to walk for a major designer by talking to moms, dads, brothers, and more.

It's so cute that I can barely stand it.

So, here are the emotional stages of walking for Marc by Marc Jacobs, or for any big designer, really, as told by the models themselves!

Last what?! That could be anything! Last text? Last IG photo? Last dress? The only thing that matters is that mom is present in this moment.

It's like she had to say it (or text it!) to believe it. No pinching needed; that leaves a mark.

It's not all glam, all of the time when you are a model. Travel time and weather can suck it!

Moms are not the only ones involved here! This model chatted with her dad, to let him know she is closing the show. He might not know what that means, but he is likely proud.

Aw!! Loved ones want in on the action, which only the models themselves can provide.

Even with such a huge task ahead of her, this model is thinking ahead to post-show activities.

Did she meet a potential suitor?! Could be! It's not all work and no play.

Now you know what goes through a model's mind before she struts her stuff.