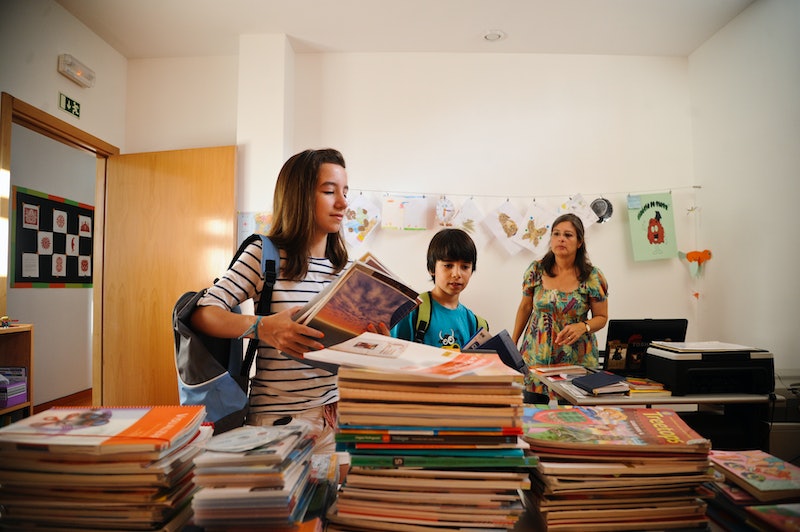 It's been clear for a while that the American right-wing has a big problem with what our children are taught in school. It's a phenomenon that's reared its head again recently, with this week's news that an Oklahoma legislative committee voted to ban advanced placement (AP) history classes in the state. It's a shocking effort, with a truly dismal justification — basically, "but high-level history is too anti-American!" And believe it or not, there are quite a few anti-educational "facts" conservatives want in our public school textbooks.

I say anti-educational because, well, it is. Trying to mandate that history classes express "American exceptionalism" is a crudely overt call for propagandizing, because truly nuanced, in-depth history should already express everything, positive and negative. If a history student reads about America as a laudable, relative haven of free speech, expression and religious liberty — perhaps detailing how historically oppressed peoples emigrated to the U.S. and found better circumstances — they may get that sense of America as an exceptional, vital force in history.

But that doesn't erase the tribulations many of those people faced when they got here. It doesn't mean that slavery didn't happen. It doesn't mean that institutional anti-black, anti-Irish, anti-Italian, anti-Chinese, anti-Latino, anti-LGBT and anti-woman bigotry didn't happen, and in many cases continues to. That's the difference — taking the good with the bad, and reflecting on it soberly. In other words, history! Here are some places conservatives haven't been willing to accept the facts as they are, and tried to tamper with the texts.

1. Evolution Ain't All That

When it comes to policing the content of our nation's history texts, there often seems to be a heavily religious influence.

This is glaringly apparent in the battle over evolution, which continues to rage nearly 90 years after the famed Scopes trial of Tennessee. It's as close to settled science as it gets — every new discovery only reinforces its comprehensive credibility, leaving opponents to fixate on an ever-narrowing list of uncertainties. But the Texas Board of Education (boasting a number of creationist members, according to The New York Times) still hasn't gotten over it. They've been angling to diminish evolution for years, in favor of a different, utterly evidence-free premise — that God both exists and played a role in the evolution we've seen. "Intelligent design," they call it.

While science ultimately won out in Texas' recent batch of textbooks, this isn't theoretical — creationism in schools has been the source of countless battles and controversies in the last few decades, and continues to be so.

An immense amount is left out in American classrooms when it comes to slavery, racism and civil rights, but most people can at least get the broad strokes: African natives were shackled and brought to America, forced to work under grueling circumstances, dehumanized, often tortured or killed.

But back in 2010, Texas conservatives wanted to put a slightly less-harsh face on the practice, or at least soften the punch. Rather than call the mass, forcible theft of thousands and thousands of human beings a "slave trade," which it unambiguously was, the Texas Board of Education tried changing it to the "Atlantic triangular trade," about as short-sold a euphemism as it gets. Luckily, the change didn't stick — they ultimately settled on "trans-Atlantic slave trade" — but the overall message is quite clear: you really can't trust conservatives around your history books when America's done something bad.

I'm not trying to step on any toes here. You might be a Christian, and I'm not. But at the very least, we should be able to agree on this: history books are for history classes, while religion can be taught elsewhere. But not everyone is okay with this — in Alabama, it became an issue. Back in 2013, the Alabama School Board delayed approval of a new high school history text because conservatives were upset it didn't assert the divinity of Jesus. Just ask ACT For America's Larry Houck, whose objection was quoted by the Tuscaloosa News.

They said "Jesus walked the earth teaching his ideas." That’s just an insult.

Ostensibly, Houck was hoping for a history text to affirm conclusively that Jesus was the son of God, in spite of the fact that there's no historical evidence for, and it's an exclusionary — what are the Jewish children to think? The Muslim children? The atheist children?

4. Climate Change Is A Hoax

You knew this was going to be on here at some point. When the Republican Party is scrubbing references to climate change from President Obama's State of the Union address, it's fair to say this is a third-rail. And make no mistake, many conservatives don't want younger generations to be educated about climate change — easier to escape the blame once they're stuck dealing with it, right?

Climate change denial was yet another scourge nearly foisted on the schoolchildren of Texas, as the incoming slate of new textbooks came under fire for acknowledging that, yeah, it's happening. As detailed by Mother Jones, here's some of the language that the Texas Board of Education wanted to reach fifth-grade schoolchildren.

Riiiight, "scientists disagree." That's true! A trifling 97 percent of scientists back human-caused climate change. In other words, it's all a wash! Nothing to see here.