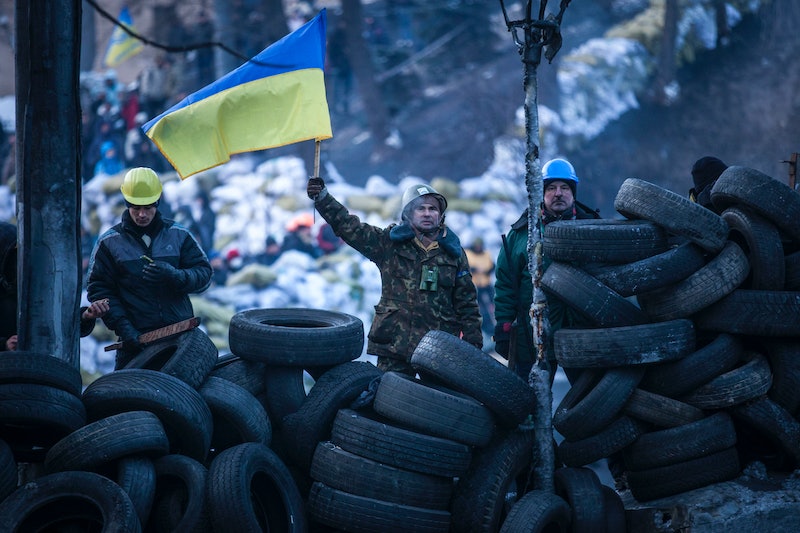 Heavy fighting broke out in eastern Ukraine earlier this week, violating the newly instated cease-fire that was supposed to lead the way to peace and diplomacy between Ukraine and the Russian rebels. On Thursday, European leaders pushed for another Ukraine cease-fire as the separatists continue to gain new ground, taking over a key rail city in the eastern region.

Leaders from Ukraine, France and Germany condemned the fighting in eastern Ukraine, which caused the nation's military to retreat from the city of Debaltseve on Wednesday. According to BBC News, Russian rebels have said the city, an important rail hub in eastern Ukraine, was "completely under the control" of the separatists. The rebels also claim they have taken at least 300 Ukrainian soldiers prisoner, though Ukrainian officials have not confirmed that number. Around two dozen Ukrainian soldiers are also believed to have been killed in the ongoing battle.

In an emergency meeting on Wednesday night, Ukrainian President Petro Poroshenko called on the United Nations to deploy "peacekeepers" to the region to keep the fighting under control and make sure the cease-fire is observed. His request for UN peacekeepers was reportedly approved by government officials.

"The issue was discussed and a decision has been taken to appeal to the UN and the EU concerning the setting up in Ukraine of a peacekeeping and security operation," Ukraine security council secretary Olexander Turchynov told reporters Wednesday night.

But Ukraine lacks support from Russia, which agreed to the cease-fire resolution drafted last week in Minsk, Belarus. On Thursday, a spokesperson for Russia's Foreign Ministry rejected Ukraine's request for UN peacekeepers. Russia believes the Ukrainian government is responsible for seeing that the cease-fire and Minsk agreement are being carried out.

Russia's UN ambassador also dismissed Poroshenko's call for the peacekeepers on Thursday, saying it raised "suspicions that he wants to destroy the Minsk accords," according to BBC News.

Earlier this week, Russian President Vladimir Putin placed the burden on Ukraine, and denied have any involvement with the fighting of the Russian rebels. “I hope that the Ukrainian authorities are not going to prevent the Ukrainian soldiers from laying down their weapons,” Putin said at a news conference.

Meanwhile, other European leaders pushed for an immediate cease-fire on Thursday, including the withdrawal of all weapons and the release of prisoners. This was part of the Minsk agreement, which also instated a buffer zone to maintain peace between the Ukrainian military and the Russian rebels.