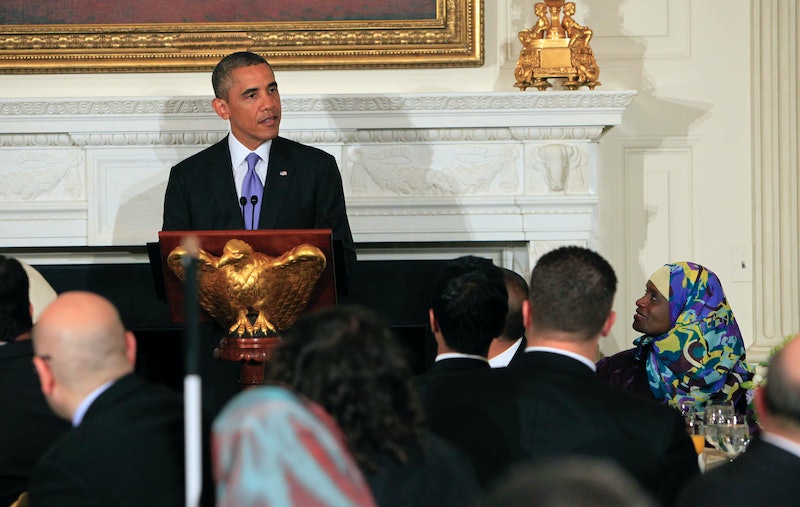 In the wake of more horrifying acts carried out by ISIS, the White House held a three-day summit on countering the growing threat of violent radicalism. Addressing a largely Muslim crowd on Wednesday, President Obama urged American Muslims to help combat violent extremism. In a major speech closing the summit, Obama upheld the administration's decision not to label the war on ISIS a fight against Islamic extremism, and called on Muslim leaders to empower their communities so as to keep out extremist sentiments.

In a reference to groups like ISIS accusing Western nations of a war on Islam, Obama said:

Muslim leaders need to do more to discredit the notion that our nations are determined to suppress Islam, that there’s an inherent clash in civilizations. Everybody has to speak up very clearly that no matter what the grievance, violence against innocents doesn't defend Islam or Muslims, it damages Islam and Muslims.

The President also pointed out the susceptibility of young people to indoctrination, and stressed for the community to nurture their talents:

I want to challenge all of us to build new partnerships that unleash the talents and creativity of young people -- young Muslims -- not just to expose the lies of extremists but to empower youth to service, and to lift up people’s lives here in America and around the world.

The administration's increased efforts at reaching out to the Muslim community — Director of Homeland Security Jeh Johnson met with American Muslim leaders to "build partnerships and build trust" — has been met with some degree of caution. In Minneapolis, where U.S. Attorney Andrew Luger has been placed in charge of building social services to strengthen the Muslim community, many are wary that the government's outreach programs could enable increased surveillance on their community.

Jaylani Hussein, Executive Director of Council on American-Islamic Relations of Minnesota, told Huffington Post that efforts to counter violent extremism should be removed of Homeland Security and the Justice Department's involvement. Highlighting their concerns, Hussein said:

It blurs the line between community outreach and intelligence gathering.

The White House's three-day summit made sure to avoid framing the fight against violent extremists as a religious war, but it has led to criticism in the media. On Thursday, The New York Post's front page featured a blindfolded Obama as the tabloid slammed the President for refusing to call groups like ISIS "Islamic terrorists."

However, the decision stems from Obama's hesitancy to encourage the narrative of extremist organizations in the Middle East of a Western war against Islam, as it potentially serves to justify their claims of fighting against nations hostile to the religion. In his closing speech at the summit, Obama also said: