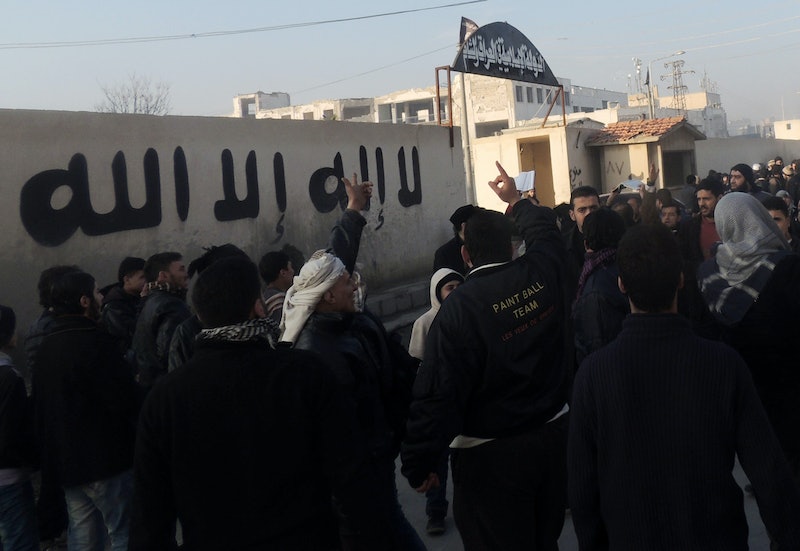 On Sunday, ISIS released a video purporting to show the beheading of 21 Egyptian Coptic Christians, filmed on a Libyan beach. In the video, which was posted with the title, "A Message Signed With Blood To The Nation Of The Cross," the executioner points to the Mediterranean and delivers a speech in fluent English. Judging by his speech patterns, it's possible the ISIS militant might have been educated in the U.S. And it's even possible he could be American.

The video shows a group of militants from Libya who have pledged allegiance to ISIS leading a group of hostages in orange jumpsuits along a beach. One militant, who's dressed differently than the others, addresses the camera and says:

All crusaders: safety for you will be only wishes, especially if you are fighting us all together. Therefore we will fight you all together. The sea you have hidden Sheikh Osama Bin Laden's body in, we swear to Allah we will mix it with your blood.... We will conquer Rome, by Allah's permission.

On Wednesday, Erick Thomas, a professor of acoustics and dialects at North Carolina State University, appeared on Fox program The Real Story to dissect the speech of the masked militant in ISIS's latest video. Though the man speaks with a discernible accent, the way he pronounces certain words offer signs of a North American upbringing, Thomas told host Gretchen Carlson.

Like the way he pronounces his R's, for example. Thomas told Carlson:

Well you can tell he's from North America, because most other parts of the English-speaking world, with a word like "sword," would say "swold" without an R sound, especially in England, Australia, New Zealand, South Africa, those kinds of places.

When Carlson asks whether the way he pronounces "due" means anything, Thomas says:

Well he doesn't say "d-yew" with a "ye" sound in it. He says "doo." The "doo" pronunciation is typical of North America. And again, most other parts of the English-speaking world would have a "ye" in it to make it "d-yew."

When Carlson asked about the way the militant pronounces "chopping off" and "fighting us," Thomas explained that the hard G sound could be a telltale sign.

He puts what's often called a hard G sound in there, so instead of saying "chopping off," he says "chopping goff" ... and "fighting us" becomes "fighting gus." But he isn't totally consistent with that because he says "sending another" without the "G" sound in there, but having the "G" in there at all is a good sign of influence from another language."

And what about his long O's, like when he says "Rome"?

His "O" sound doesn't sound like mine. I mean, mine sounds like "oh" and his sounds more "ol," "Rolme." Now that could mean a couple different things. It might indicate the northern edge of the United States, but it also could indicate influence from another language, such as Arabic.

Then Carlson asks the big question that foreign policy experts and anyone fighting ISIS would want to know: "Is he an American who eventually learned to speak Arabic, or is he Arabic and he came to America and spent a considerable amount of time here?"

While the man's provenance remains unclear, intelligence officials recently reported that an estimated 3,400 Westerners have joined ISIS, including as many as 150 Americans. The numbers were part of a testimony prepared for the House Homeland Security Committee and obtained by the Associated Press. If the numbers are accurate, then it seems the chances of the executioner being American are not so slim.