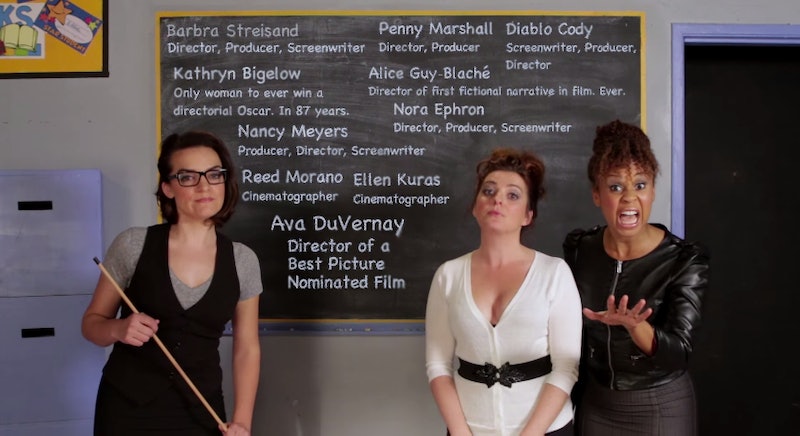 Every year, it becomes apparent all over again that the people in charge of deciding who gets Oscars are not exactly representative of all the wonders cinema has to offer. In other words: They're 94 percent white and 77 percent male, staggering statistics that aren't actually all that surprising when you look at who these people have been nominating — every year but especially this year. So a steady pulse of "YAASS" pulses through my veins when I see videos like "Hey Academy, I'm A Woman," which turns the Academy's shameful habits into a musical parody.

Gender disparity in Hollywood runs rampant in the industry, and it's apparent most box office weekends of the year. It's there, with the symptoms evident everywhere from the big blockbusters (just look at superhero movies and how long it took them to hire a woman to direct) to the sanctioned celebration of the year's best films. Women are often left out of both — and it's not because they're not capable, and not because they haven't been making projects worth celebrating. The gap is so evident that it's clear that it has nothing to do with merit.

When it comes to the Academy, for instance, just look at the Best Director category. The number of women who've been nominated throughout history is paltry at best, and I promise you it's not because women have some mystical inability to craft a quality, artful film worthy of the title.

Women are in film, women are directing, women are creating — and we all need to be paying more attention. I'm looking at you, Academy. (And way more people should have seen Beyond the Lights this year.)