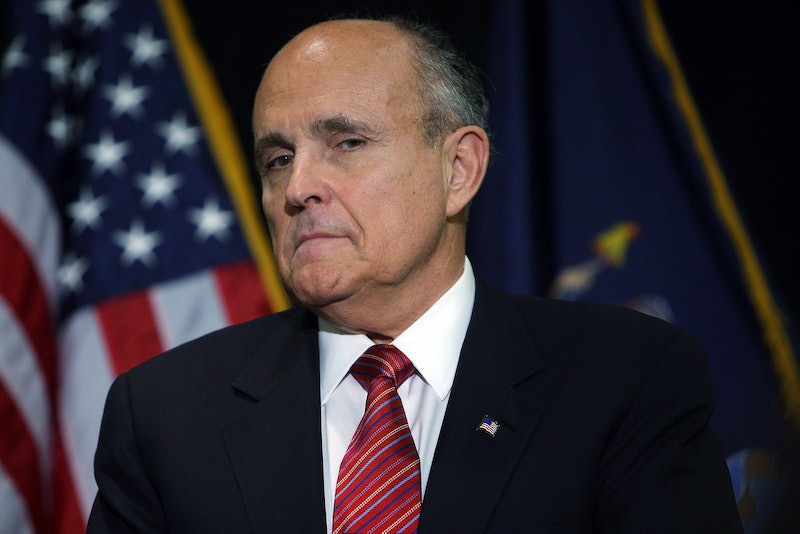 Watching politicians squirm and backtrack on remarks they've previously made often serves as some form of entertainment, and the former Mayor of New York City presented a golden opportunity to kick back and see him do exactly that, after Rudy Giuliani backtracked on his "Obama doesn't love America" comment.

In an interview with Fox News on Thursday, Giuliani said:

His explanation comes hot on the heels of his less-than-respectful remarks at a private dinner fundraising for potential GOP presidential hopeful Gov. Scott Walker on Wednesday night, in which he challenged Obama's patriotism. To the crowd consisting of right-leaning media, business executives, as well as Gov. Scott Walker, Giuliani said:

Horrible indeed — at least Giuliani had the decency to admit that. While many Republican lawmakers have made clear over the years of their lack of fondness for President Obama's policies — and often for the President himself, too — through oftentimes highly critical remarks, the former mayor took it to new heights on Wednesday.

Of course, it's his prerogative to voice his opinions (particularly at what was supposed to be a private event) but Giuliani's position and prominence made his remark, and its reasoning, downright bewildering. After Politico reported his comments, Giuliani was deservedly criticized — White House deputy press secretary Eric Schultz said that it was "horrible"; current NYC Mayor Bill de Blasio said it was a "pitiful," "cheap political trick" (ouch); and members of the media similarly heaped scathing criticism on Giuliani.

But others in the GOP, most strikingly Gov. Walker, refused to chastize the former mayor. When asked on CNBC to react to Giuliani's comments, Walker said:

I rarely agreed with President Bush, but I never questioned his love for our country.