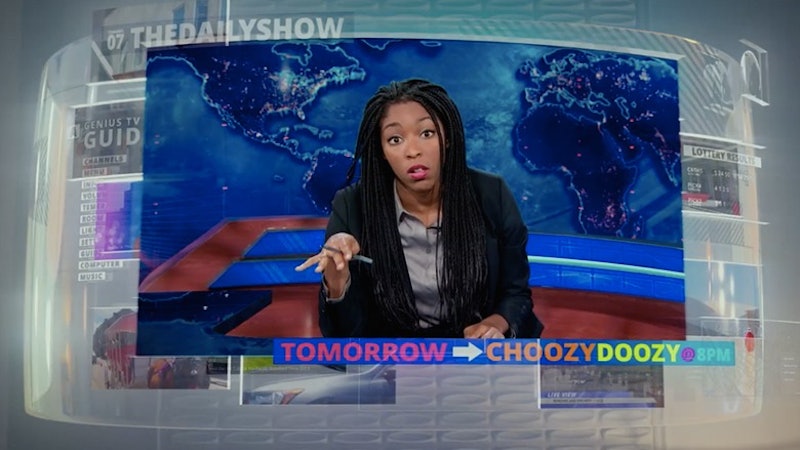 By now you may have made peace with the fact that Jon Stewart is officially leaving his hosting gig on Comedy Central's The Daily Show, or you're still so deep into the grieving process that only time and reruns will be able to pull you out of. The lack of a successor to Stewart's seat may be worrying you, especially with the news that Daily Show correspondent and fan favorite Jessica Williams doesn't actually want to take over the gig, a decision that has disappointed fans but is nonetheless hers to make. Her reasoning? At 25 years old, she doesn't feel quite ready to take over for Stewart. But what about when she's 35 — in 2025? In Hot Tub Time Machine 2, out Friday, Feb. 20, Williams is in the host's seat, and she seems mighty comfy there. So, naturally, we had to ask the cast of Hot Tub Time Machine 2 — do they support William's as Stewart's successor, at whatever point in time?

"We're standing firmly behind our candidate for the Daily Show elections this year," Hot Tub Time Machine 2 actor Rob Corddry jokes when asked whether Williams was the cast's choice for the next host. "That's for America... and for the kids." Craig Robinson also chimes in: "How much proof do you need that the hot tub is real?"

The cast of Hot Tub Time Machine 2 is just as interested in Williams as host, so even though she's declining the role now, it does remind us that there very well could be a place for her some time in the future. Too bad we can't all take a hot tub time machine to see if it happens. Since that technology is being hidden from us by Robinson, Corddry, and the rest of the cast, check out this clip from the sequel instead: