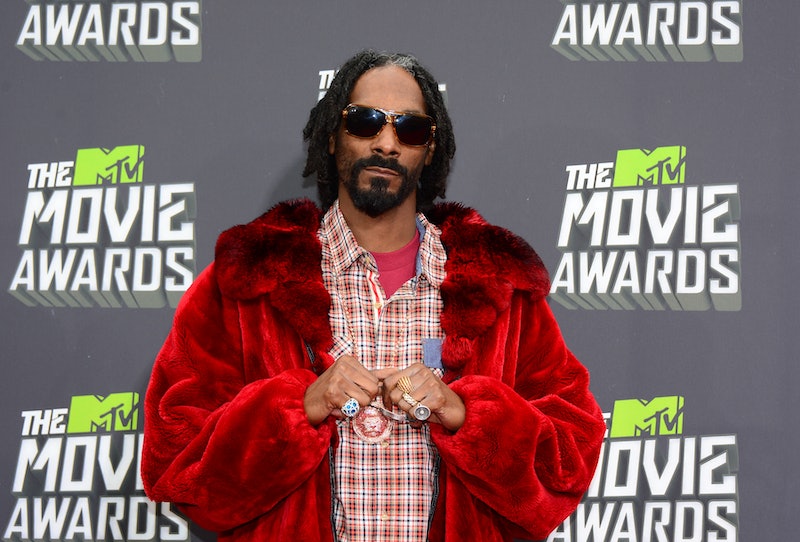 The latest celebrity to comment on Bill Cosby's rape allegations is only making things worse. During Snoop Dogg's "Plizzanet Earth" segment on Jimmy Kimmel Live on Thursday night, he tried to joke about a seal humping a penguin by comparing it to Cosby, and needless to say, it was not funny. Snoop is effectively implying that rape is something to laugh about. As a helpless King Penguin is pinned under a giant Fur Seal and unable to escape as the seal tries to mate, Snoop laughs, saying, "Aw no, 'cuz, this [n-word] is screwing a penguin, 'cuz. He's cold-blooded. He went Bill Cosby on her, 'cuz. Look at him." He then launches into a full Cosby impression, muttering, "Puttin' in, puttin' in that pudding."

Yes, you read that right — Kimmel did not bleep the n-word, yet they took the time to later censor "you gotta look at that sh*t" when Snoop shows a friend the disgusting video. They also thought the whole rape joke was a good idea. Taboo topics may be part of the job for late-night hosts, but making light of Cosby's rape allegations by comparing them to a penguin being mated with against her will and laughing about it simply isn't funny. It's offensive and wildly inappropriate, and I'm surprised that Kimmel allowed this on his show at all. The experienced late night host's only response to the video, so far, was correcting Snoop's use of "cold-blooded. " He pointed out, "I think they're warm blooded, but I understand." Maybe he should have been paying attention to the rest of the content, too.