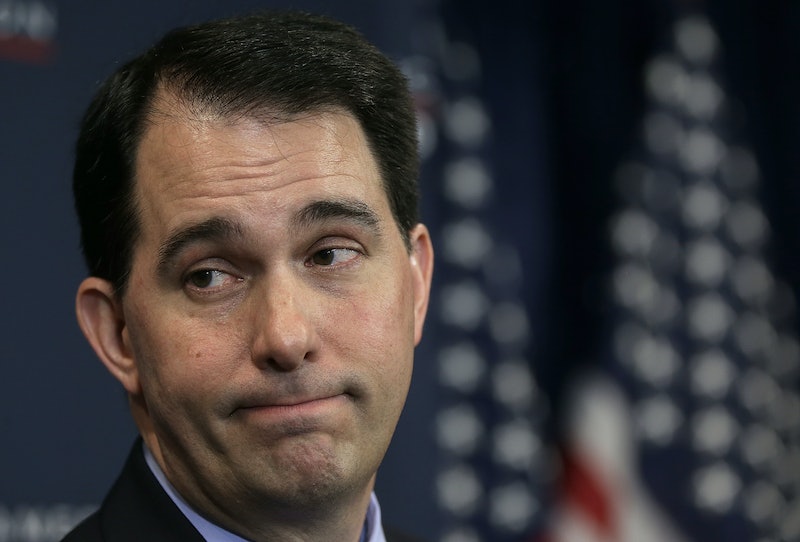 You wouldn't think it'd be such a tough answer, right? Backed into a corner by Rudy Giuliani's controversial comments earlier this week, that "the President doesn't love America," Wisconsin Governor Scott Walker was posed just that question Saturday. And after some attempted disclaimers, he admitted it — Scott Walker isn't sure whether Obama loves America, but he'd really prefer people didn't ask about it.

Regardless of your political persuasion, it's sort of easy to understand the frustration. You're potentially an up-and-coming Republican presidential contender, doing the hard, necessary work of currying favor with different facets of the American right, and suddenly Rudy Giuliani opens his mouth. It'll be interesting to see whether Walker is also called to account for Giuliani's assertion that Obama's been influenced by communism since childhood, a similarly brazen embrace of the right-wing fringe.

But this much, at least, should be really obvious and really easy. If they ask "does the President love America," and you want to run for President, just say yes. There have to be other overt, aggressive disrespects you can show to the President you can use to balance that scale, right? But when questioned by the Milwaukee Journal-Sentinel, Walker just couldn't bring himself to bite the bullet.

I assume most people in this country love America. And to me I don’t think it’s worth getting into the battle over whether he does or he doesn’t. He can handle that himself. I know I do. And I know there are great people in this country who love this country and who ... feel this country’s exceptional and it doesn’t necessarily align by party. I think there are Republicans and Democrats and plenty of people in between. I’ve never asked the president so I don’t really know what his opinions are on that one way or another.

In fairness to Walker, he's obviously envisioning a fraught 2016 race ahead of him. Make no mistake, the reason he isn't willing simply to say he politely disagrees with Giuliani is forward-looking — why risk defining yourself as some mealy-mouthed Obama sympathizer when you're still months from the thick of it? It is worth noting, given the extremely political answer above, that according to the Journal-Sentinel Walker was as clear as could be about whether Giuliani had "crossed a line": "No."

In any event, you have to imagine Walker's feeling a little frustrated with Giuliani, whatever he's unwilling to admit publicly. If there's anything he doesn't want or need next, it's being asked whether he too believes that Obama's been under the thrall of Frank Marshall Davis since age 9. But he's also clearly unwilling to repudiate Giuliani, so another dustup here or there would be entirely predictable.