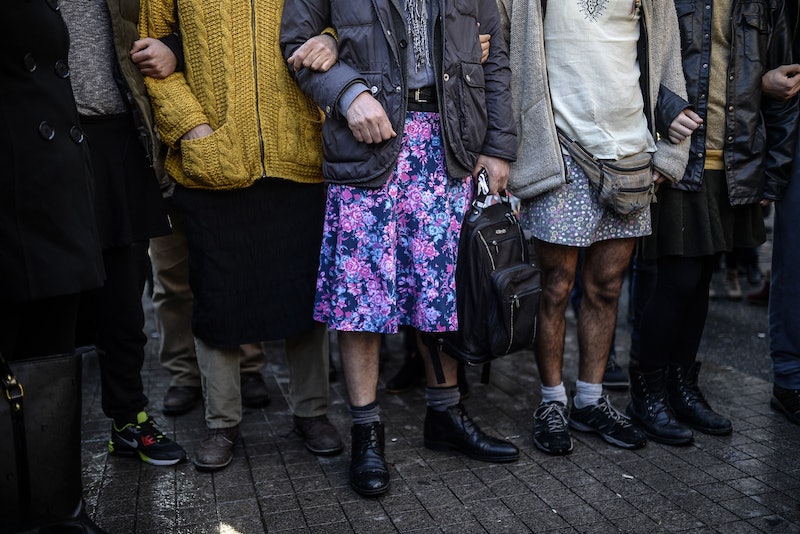 The movement towards gender equality may be led by women, but male allies continue to make invaluable contributions to the cause. Some of these contributions are a bit more visible when the men in question put on women's clothing, like the Turkish men who donned skirts in the streets and on social media to protest the brutal murder of a young woman last week. This trend in feminist protest has been going on for years now, most recently sweeping France, India, and Iran. While the results can often look funny, the intention is anything but humorous.

In countries with strict gender roles enforced by religious and state laws, men who dress in drag to make political statements on behalf of their mothers, sisters, wives and friends do so while risking their reputations and even careers. The men who use aesthetics to raise awareness on sexual assault, rape, gender inequality, and women's issues remind us that women's rights are human rights, and that men are equally part of the solution. In celebration of the brave men who defy gender stereotypes and put themselves on the line (and in drag) for gender equality, here are four different times men rallied for women's rights in women's clothing.

1. Turkish men wear skirts to protest the sexual assault and murder of a young woman

Last week, a 20-year-old woman fought off a sexual attack by a minibus driver, only to be killed for refusing his advances. This horrific act of misogynistic force has ignited protests across Turkey: while women gathered fervently in the streets, men also joined in, wearing skirts in public and in pictures on social media to raise awareness about the incident. These protests constitute a significant move for women's rights within an extremely patriarchal society, where rates of femicide are unsettlingly high.

To fight sexism and encourage gender equality, male students from 27 different high schools in Nantes, France wore skirts to school on a designated day this past summer. While they weren't protesting any single injustice, it's important for every day rallies like this to take place, particularly with such young, impressionable participants.

3. Indian men dress in skirts to protest brutal gang rape of a student

When a 23-year-old student was gang raped on a bus in New Delhi, Indian authorities responded by suggesting they ban skirts to stop further rapes. This dangerous, victim-blaming "solution" inspired a rally in which men wore skirts to demonstrate the absurdity of banning skirts to prevent rape, and to make the point that clothing does not cause sexual assault.

After an Iranian court ruled that a man had to walk down the street in women's clothing as punishment, hundreds of men banded together to appear in female dress on social media. Many men who dressed in traditional female garb even explicitly identified as feminists, which makes their efforts even more radical. According to Masoud Fathi, the Kurdish poet and activist who started Kurdish Men For Equality, "Women are part of our personality, our character. If we oppress one part of our character, we oppress ourselves. If one part of us is unfree, our whole cannot be free either." You said it, brother.

More like this
Twitter Was Saying The Same Thing About Sam Ryder’s Surprising Eurovision Result
By El Hunt
25 Quotes About Love To Share During Pride Month 2022
By Madeleine Aggeler and Emma Garza
How To See The Lunar Eclipse On May 15-16, 2022
By Kaitlyn Wylde
Photos Of Boris Johnson Drinking At A Downing Street Lockdown Party Have Surfaced
By Bustle UK
Get Even More From Bustle — Sign Up For The Newsletter