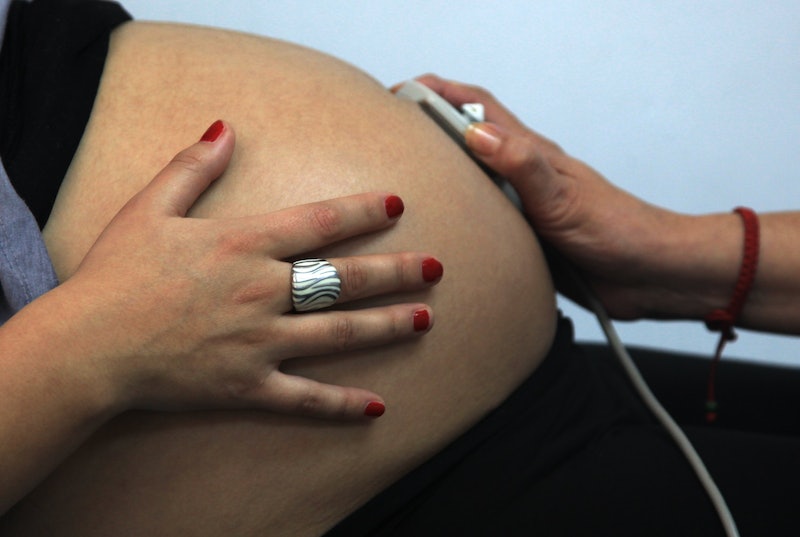 If you don't already have mad respect for pregnant women, consider the fact that they are perpetually lugging around many extra pounds of baby, can't sleep on their stomachs to watch Netflix, and possibly spent many months casually vomiting while an adorable parasite grows inside them. And if that's still not enough for you to give props, then you need to sit yourself down and watch this ridiculous video of a pregnant woman whose baby is moving in utero, because her unborn child basically just turned her belly into a human waterbed.

Before we get too terrified by this phenomenon (which seriously looks like it came straight out of a sci-fi movie), you should know that babies kicking and thrashing around in the womb is, alarmingly enough, perfectly normal. Expectant mothers can start feeling little twitches as early as four months into pregnancy, with movements becoming more frequent and pronounced as the baby grows and eventually matures to an age where it decides to throw its only little one-man uterus rave like this little guy did here. If you were ever wondering why pregnant women pee like race horses, please observe just how little regard their tenants have for their surrounding organs and the mystery will be cleared up pretty quick.

This is far from the only weird thing that happens to women when a creature grows inside them: Their mouths can start to taste metallic, they might get crazy migraines, or even feel the sudden irrepressible urge to dance in a Kmart commercial. Every woman is different, and so are her pregnancy symptoms. But, at the very least, they can all be bonded by these baby moving shenanigans: