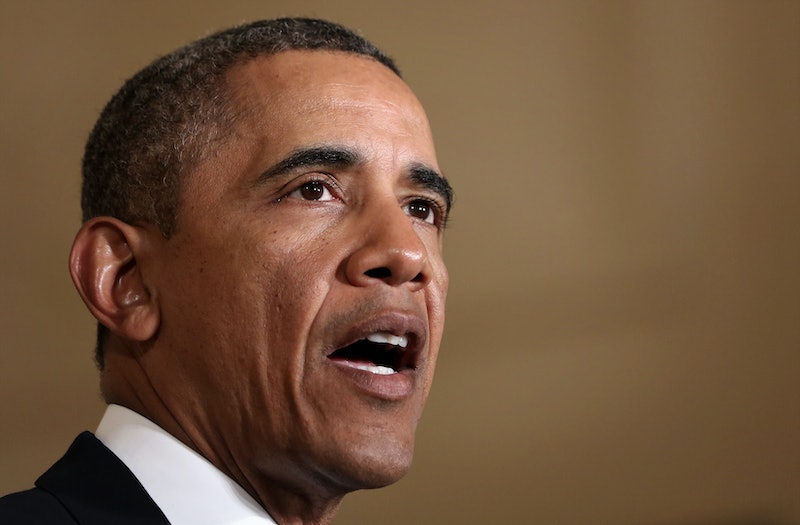 Just as he promised after the legislation passed through Congress, President Obama vetoed the Keystone XL bill, saying the measure did not follow standard procedure and did not fully consider all of the effects it might have on the United States. The Republicans wanted a permit to begin construction to be granted immediately, without a full review process. The veto will likely begin a battle between the president and the Republican-led Congress. Although it's only Obama's third veto of his presidency, he's issued 13 written veto threats this year alone. According to USA Today, Obama said in his veto statement about the pipeline bill:

The presidential power to veto legislation is one I take seriously. But I also take seriously my responsibility to the American people. And because this act of Congress conflicts with established executive branch procedures and cuts short thorough consideration of issues that could bear on our national interest — including our security, safety, and environment — it has earned my veto.

The Senate passed the bill in late January, and the House approved it two weeks later. It went to the president's desk, and Obama vowed that he would not let the legislation go through. He held true to his promise, and White House Press Secretary Josh Earnest said the measure was vetoed "without any drama or fanfare or delay."

It's unlikely that Congress will be able to override the veto because the votes that got the bill to the president's desk were not enough to provide the two-thirds majorities needed in both the Senate and the House. But it's likely that this big step will cause even more discord between the Republican-led Congress and the Democratic president. It's worth noting, though, that Obama didn't veto the legislation because he doesn't approve of the pipeline (though he has hinted before that he believes the harm to the environment would be greater than economic benefits, according to USA Today). He vetoed the legislation because of the Republicans' attempt to circumvent procedure, and he could still consider the bill at another time.

In fact, he might have to. As NPR reports, the Republicans vowed to make passing the Keystone XL pipeline bill a priority as they have control of Congress. So, though this version of the bill has been kiboshed for now, we'll likely see a new version at some time in the future.