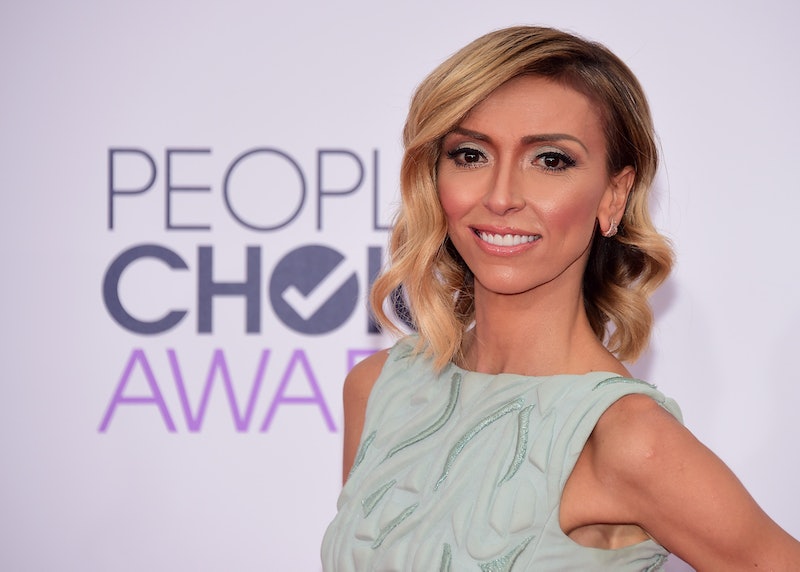 This may be the most that I've ever liked red carpet pundit Giuliana Rancic. Monday night on the Academy Awards edition of Fashion Police, Giuliana Rancic called out the Academy for snubbing Joan Rivers in the 2015 Oscars "In Memoriam" tribute by giving them the double middle finger. With two obscene gestures, she captured the sentiment of millions of pissed-off Joan fans.

On Monday's special telecast of the show, Rancic made a surprising segue from Lupita Nyong'o's dress to calling BS on the Academy for leaving her former Fashion Police partner out of the 87th Academy Awards "In Memoriam" montage. Even if she has recently said some horrifically wack things about Zendaya's Oscars beauty (which she has since apologized for), Rancic is earning some brownie points in my book by speaking out about this profound snub.

Flipping not one, but TWO birds, Rancic said, "Screw them [the Academy] anyway for leaving Joan out of the in memoriam montage." Kathy Griffin, Kelly Osbourne, and Brad Goreski all seconded Rancic's emotion, saying "Amen!!" and stopping just short of screaming "YAAAASSS!!"

Meanwhile, I'm sitting at my desk, watching this and pounding the table, screaming "Yeah! Justice for Joan!!" My dog is totally looking at me funny, but IT'S SO WORTH IT!!

Supposedly, Rivers was left out of the montage because she wasn't technically a member of The Academy — the segment is supposed to only honor members — but that little detail obviously shouldn't keep her from being acknowledged. (The Academy released a statement on the topic explaining Rivers is included in the In Memoriam section of their website.) Whether or not Rivers was technically an Academy member, she was a member of the Oscars institution with her famous red carpet coverage.

I'm so glad Rancic decided not to stay mum about the profound oversight of her colleague and friend. Because she was an outspoken and unapologetic woman, plenty of institutions ignored or tried to silence Rivers while she was alive. It's SO important that her cohorts don't allow this to happen, now that she's gone.