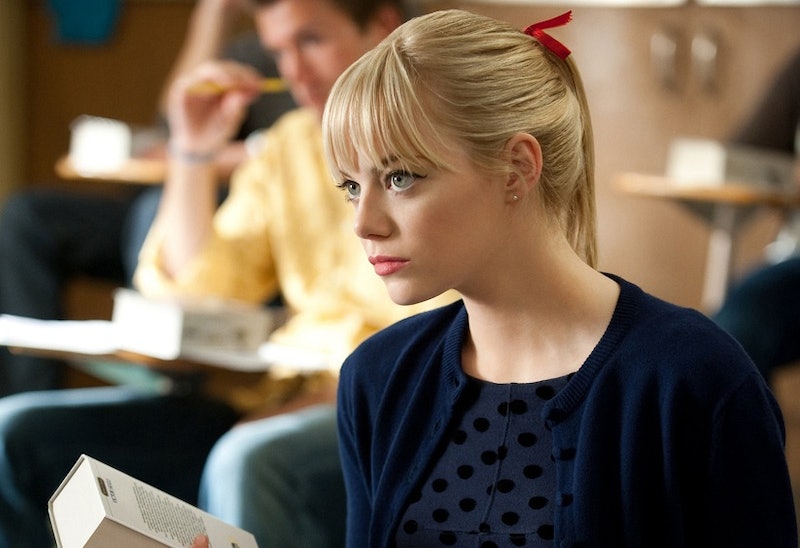 Let it be known from now: I am a whole-hearted advocate of Emma Stone being everywhere. Her first Oscar nomination via Birdman was well-earned, as was that LEGO Oscar she ran around with at the Academy Awards ceremony Sunday night. Stone is great both in comedies and in dramas, and it's pretty baller that she just completed a stint on Broadway starring as Sally Bowles in Cabaret. And it's all of these things combined that makes it completely understandable that, when Spider-Gwen hit shelves bringing Gwen Stacy her own comic book series, one of the questions to immediately pop up was "Where is Emma Stone in this?" After all, she was one of The Amazing Spider-Man's most charming elements, and who doesn't want to see their favorite actors suit up as a superhero these days? So... is Emma Stone starring in a Spider-Gwen movie?

I have literally no doubt that Stone would rock a role like that — in fact, I would like to say right here right now that if Marvel hasn't already made a play to recruit her to be some superhero or another in the MCU, they should get on that. But it seems the ship has sailed on Stone as Spider-Gwen — not because the character died in the last Amazing Spider-Man movie (Spider-Gwen takes place in an alternate universe), but because Sony and Marvel very recently put a lid on that era of Spider-Man reboots, declaring Andrew Garfield's Spider-Man over and moving on to whoever they cast next. An Emma Stone Gwen Stacy would automatically imply a tie to the Andrew Garfield Spider-Man films, which isn't in line with Sony's new deal with Marvel.

Another thing to remember: Comic book movies tend to come years (often decades) after a character's comic book debut. Spider-Gwen's still new, so let's give her time to grow into herself before we push her onto the big screen.