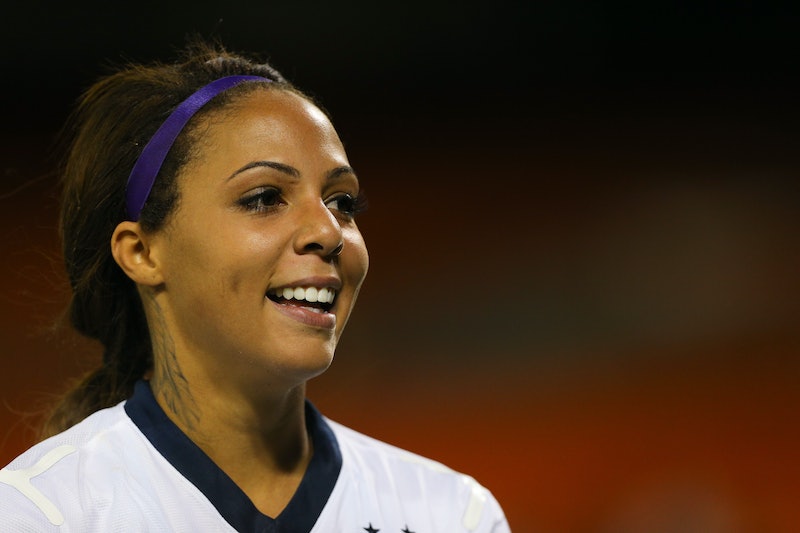 U.S. Women's National Soccer Team forward Sydney Leroux scored the third and winning goal in Sunday's international friendly in Toronto. After the win against Canada, the 23-year-old player popped her jersey and sprinted across the field, putting her finger to her mouth as if to shush the fans. Leroux was given a yellow card for her triumphant display, a penalty card signaling “unsporting behavior”. Ouch.

In a statement issued through the United States Soccer Federation (USSF), Leroux says, “my tweet from this morning wasn't in response to anything from yesterday's match at BMO Field”. Rather, Leroux says, “the atmosphere at the stadium was a positive step forward for women's soccer. Unfortunately, the type of abuse I have received in the past and via social media for my decision to play for the United States is a step backwards. That is what prompted my response in the heat of the moment.” The USSF collected some of the callous tweets leveraged against Leroux, which referred to her with racial and sexist slurs and called her a “scab,” “insufferable classless,” and “a loser”.

Whereas the cyber abuse faced by Leroux is pretty rough and fairly obvious, her celebration has still been criticized by some in the public sphere. For her part, Canadian captain Christine Sinclair says, “maybe not the classiest of moves”.

The backlash calls into question another underlying issue, which has yet to be articulated in mass media: the extent to which gender frames the manner in which athletes' behavior is perceived by the public.

Since the passage of Title IX, the disparity in the treatment of male and female athletes has become a mum issue, at least in the mainstream. However, we should turn an eye to the ruling hetero-normative ideology of American culture. Gender roles and other tacit rules of conduct are instilled in the corners of our minds, no matter how progressive we purport to be. So, with all that in mind, I question how Leroux's display would have been received had she been male.

In the wake of the previous flack fueling her response and the laudable victory before her, I am skeptical that she would have faced the same criticism for her celebration. In fact, I believe that a male athlete would have been lauded. At worst, his antics on the field would have garnered a yellow card–and praise for his composure on virtual outlets. At best, his antics on the field would have been brushed off as the response of a triumphant player and–yup, you guessed it–praise! Yet Leroux, being a woman, has been disparaged for her display of pride. She scored the game-winning goal–a pretty epic feat, and she conducted herself with relative poise on social media outlets in the time leading up to and following the exhibition win. Yet because she chose to flaunt her dogged tenacity against cyber bullying, she has been censured. Please. The criticisms lobbied against Leroux are nothing more than the suppression of feminine perseverance and potency.