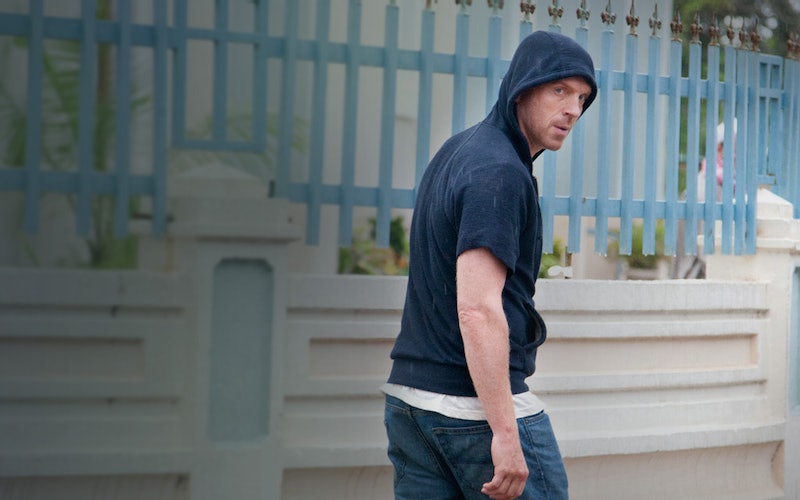 We open in sunny Venezuela, but for Nicholas Brody's return to the show, things are much more dark. His eyes are rolling back, his stomach is bleeding and pulsating, and he's being whisked away by a group of thuggish-looking men with automatic weapons.

I'll definitely give a round of applause to the Homeland directors and writers for having the balls to maintain non-English languages as just that—in non-English, and without subtitles. If you understand the language, you get a glimpse others can't (kind of like being an armchair spy) and when you don't understand, you're left in the dark as to the Venezuelans' slang for "fuck."

We watch in chiaroscuro as Brody gets makeshift surgery in a shady industrial building complete with throbbing lights since there's $10 million bounty on Brody's head. The surgery scene is not for the faint of heart.

When he wakes, he only has a few small bandages. He's now in a bright room where a pretty nurse instructs him to lie back. He tries to get up, holding on to her tightly and stumbles to a gap in the concrete which serves as a window. Someone has taken his passport and wallet in the meantime and one of the mysterious men giving Brody refuge says he knows Carrie and that's why Brody's safe.

"We're here because the world outside can be judgmental and cruel," the doctor says.

After a lot of limping around and panting, Brody is taken out onto a platform and his passport and watch are returned to him. A man is identified as being the thief but Brody barely does more than shrug. However, the head man in charge of Brody's safety orders the thief shoved off the floor and you hear the crash when he presumably reaches his demise. Crime doesn't pay, kids.

Pretty soon after making a lot of frantic faces, Brody is convinced that he needs to leave. Even though he has no money, he walks out of the complex. "I just need to get to the next place," he says.

"This is it for you. End of the line," the head of Brody's protection squad says and Brody seems to accept the truth of it. He is about to be injected with heroin when he grabs the arm of the doctor and orders, "Get out." Not how to ingratiate yourself to your hosts, sir.

Next, cut to Carrie in a different sort of doctor's office (it's buttercup yellow) talking about how well she's sleeping and how lucid she is. "Will you please tell Saul that I'm better?" she says more or less.

While making arts and crafts, she leaves for the bathroom and smashes her head against the mirror of the bathroom. Popsicle art is dangerous. Cue the Carrie cry face.

Back to Brody, whose great plan is to escape the partly built apartment tower now inhabited mostly by squatters, and escape to the mosque he sees from his room. He somehow cons the poor girl tasked to nurse him to help him escape and goes to the mosque.

"Take me with you, you can't leave me here," she says when they arrive. But of course, he says no. (Folks, don't tie yourself to men or women with $10 million for them dead or alive.) She walks back and one can only wonder how long she'll stay safe after disobeying orders.

Brody is accepted into the mosque and as he is taking a shower, a couple of Venezuelan government-affiliated men taken control of him. The Iman of the mosque says to him, "You're not a Muslim, you're a terrorist."

Is it all over? Of course not!

The doors of the Iman's home swing open and the head of Brody's protection and his men come in shooting the Iman, his wife, and the two government officers. "I told you don't go and then you leave. This is what happens, we all get in trouble," the Brody protector says. Now Brody is thrown into a cell-like space. "Carrie won't save you. No one will."

Then, the doctor comes back into the doorway saying, "You've been a naughty, naughty boy." And with that delivery, "naughty" makes the top 10 of creepiest words in the dictionary.

Speaking of other people caught in the clutches of Team Brody and Carrie, a poor nurse has been persuaded to help a girl out. Carrie thinks Saul is trying to see her though she's not allowed visitors since she's still super crazy, but life is disappointing. It's actually a lawyer who says he knows someone who wants to help get her out of the psych ward.

"Why would you want to help me?" she says.

The lawyer tries to sweet talk her, appealing to her belief of sanity and even says that killer line, "Carrie, I'm on your side."

She sees right through it. She used to say that herself, after all. "Well I'm telling you 'no' and whoever the hell it is you're working for." You go, girl.

Cutting again to Brody in the dark room, the doctor says, "Everywhere you go, other people die but you always manage to survive," while dropping off some heroin. "You're like a cockroach. Still there… you belong here, am I right?"

Brody doesn't respond. But who needs a nod or a shake when you have heroin?

The episode ends with Carrie huddled in the corner of a room.

And a friendly reminder that we're all existentially alone.