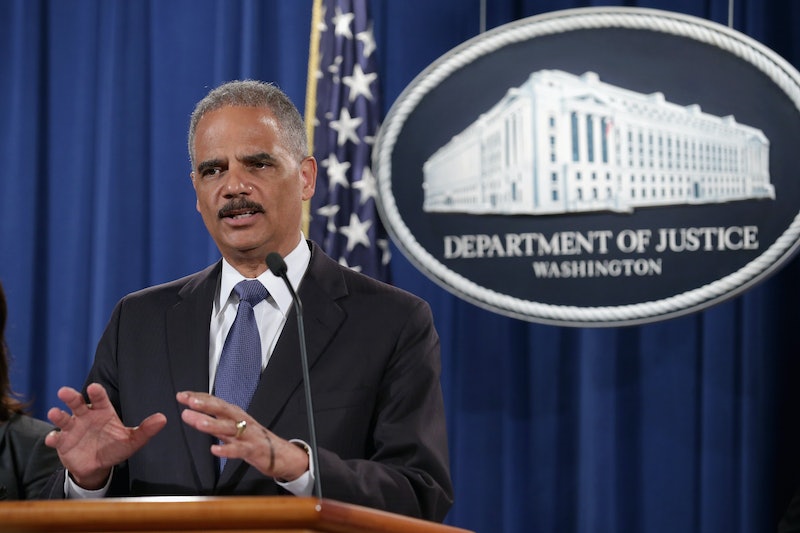 Oh Fox, you never disappoint. Morning news show Fox & Friends tweeted at Attorney General Eric Holder on Thursday and questioned recent statements he made on whether he would dismantle the Ferguson police department. The ridiculous tweet suggests that Holder’s comments were related to the Ferguson shooting, which took place shortly after midnight on Thursday and left two officers injured.

The Fox tweet says, “New #Ferguson violence comes just one week after AG Holder vowed to dismantle the city’s PD. Is this what he meant?” Dear Fox, on behalf of anyone with common sense, I can answer that question. No. The United States attorney general did not mean he would have officers killed in order to create a lawful police and legal system in Ferguson.

After the Justice Department announced it determined the Ferguson police department acted with “racial bias" in its approach, Holder told reporters last Friday the federal government was prepared to use its power to ensure the civil unrest and faulty police work that took place in Ferguson last year would never happen again. He said that could mean working with existing brass or possibly creating a new structure within the city’s law enforcement, according to ABC News. When asked if his plan included dismantling Ferguson’s police force, Holder said, “If that’s what’s necessary, we’re prepared to do that.”

Does Fox really think Holder helped pull the trigger at Thursday's shooting? Probably not, but no one can ever quite figure out its method of reasoning. I’ve never understood how the conservative network continues to draw crooked lines from point A to point B.