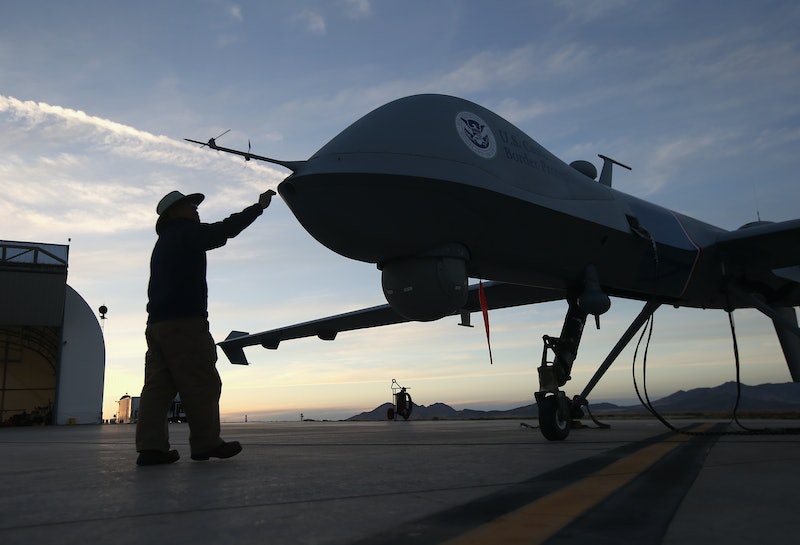 Hey, remember how we’re not supposed to worry because the NSA is great and it’s all totally fine because we have this flawless system of checks and balances? Well, here's something to chew on.

At a Wednesday hearing before the Senate Judiciary Committee, FBI Director Robert Mueller revealed that the bureau has been using surveillance drones on American soil, and that the FBI is only in the “initial stages” of developing privacy guidelines to deal with it.

Mueller claims the drones are used only in a "very, very minimal way, very seldom." He added that they're deployed only in "particular incidents where you need the capability."

But, worryingly, when asked about how long the images captured by the drones were kept, he said he wasn’t sure.

The use of surveillance drones was apparently news to members of Congress as well. Senator Chuck Grassley sent a letter Wednesday to Attorney General Eric Holder asking why the Justice Department hadn’t mentioned the unmanned planes. Grassley says the FBI had been asked last year whether they were using drones, but that there’d been no answer.

Senator Dianne Feinstein, who was one of the members of Congress telling us not to worry about PRISM and Verizon, seemed pretty concerned about the news too.

"The greatest threat to the privacy of Americans is the drone and the use of the drone, and the very few regulations that are on it today," the Senate Intelligence Committee Chairwoman said.

Mueller agreed that the issue is “worthy of debate and perhaps legislation down the road.’’ Ya think?

According to the Associated Press, it’s likely that 30,000 drones will be being used around the world within half a decade, 15,000 of them within the United States.