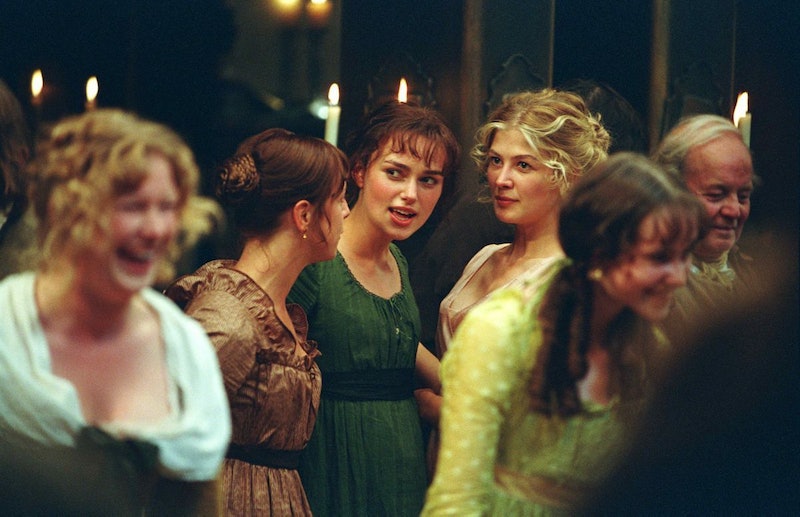 As she established herself as a serious writer, Jane Austen showed us all that her bread and butter were her women's stories. Her badass-ness manifested in proving that that novels written by women about women can uncover real truths, challenge, and unseat any reader — and, come on, is there any more feminist statement than women are (gasp!) human beings who are just as complex and interesting as men? I think not. In fact, I know not.

Sure, it's easy to ask whether or not we can actually learn anything about feminism from her books if Austen's plots center on marriage, but you have to spend some time looking at the women she created. Austen wrote rational, independent, often remarkably fiery-tempered characters who exercised as much of their free will as they could given societal expectations — strong women who made the best of choices limited by context. There's so much to learn from the ladies in her stories — who were totally feminists in the ways that they could be, and have a lot to teach us.

In fact, here are some lessons that every 21st century woman can draw from Austen’s novels. Jane was such a rockstar. But you already knew that.

You Can't Judge Other Women for Their Choices

In Pride and Prejudice, Elizabeth Bennet is outraged when her close friend Charlotte Lucas accepts the famously ridiculous Mr. Collins' marriage proposal. Having vowed only to marry for love herself, Elizabeth is disappointed that her friend has chosen a marriage of convenience — and judges her harshly for her decision. But Charlotte is a practical soul; unlike beautiful and witty Elizabeth, she lacks other marriage prospects, and so she decides that settling into a life as Mrs. Collins is the right choice for her. Seeing the way Charlotte makes a happy life for herself under the same roof as the increasingly absurd Mr. Collins forces Elizabeth to realize that she doesn’t always know what’s best — and that she has no right to judge other women for their choices.

Never Accept Less Than You Deserve

Even though her father’s estate is entailed to Mr. Collins, leaving Elizabeth and her sisters penniless upon his death, she is dead set on choosing who she marries — and marrying for love. When the wealthy but not-so-gracious Mr. Darcy proposes to her, Elizabeth bristles at his words. Mr. Darcy tells her that despite her crude upbringing and embarrassing family connection, he loves her against his better judgment. Elizabeth is rightly angered; no one, she says, not even the owner of Pemberley, is allowed to make her feel inferior — and she, like any other woman, deserves to be with someone who respects her and where she comes from. She and Charlotte are different women and their choices, however different, reflect who they are and what they believe will make them happy.

It’s Up to You to Chase Your Own Happiness

When Lady Catherine de Bourgh, Mr. Darcy’s controlling aunt, storms into the Bennet house to demand that Elizabeth turn down Darcy’s marriage proposal — since the Bennets are not up to par with the inhabitants of Pemberley — Elizabeth does not let the illustrious figure talk down to her. “I am only resolved to act in that manner which will, in my own opinion, constitute my happiness,” she tells her. Elizabeth hits an important chord: her happiness comes first, no matter that anyone else tries to tell her otherwise.

Of all of Austen’s characters, Emma Woodhouse is perhaps the most overtly “feminist” — she is essentially the head of her household (frail and whiny Mr. Woodhouse is hilarious but useless), and she chooses to forgo marriage because she already holds a pretty good standing in society. She is strong-willed, confident, and independent, and does not let her gender interfere with her position as a looked-up-to leader in Highbury.

Accept That You’re a Work In Progress — and That's OK

But Emma is also a bit of a tyrant. Selfish, strong-willed, but well-meaning, she is a fascinatingly complex heroine. When she tries to find her friend Harriet a husband, Emma fails miserably, hurting Harriet’s feelings deeply. Despite her overconfidence, Emma does not always know best — but that doesn’t mean she stops believing in herself. Emma is ultimately willing to accept and correct her mistakes so that she can do right by her friend.

There’s a Special Place in Hell…

...for women who betray other women. Northanger Abbey's Catherine Morland befriends Isabella Thorpe, taking her into her confidence and failing to see that Isabella is actually a vain manipulator out to marry the highest bidder. Catherine is hurt and puzzled when Isabella’s true colors shine through, but she is strong enough to cut ties with a person who was simply using her to meet her own callous ends.

It Takes a Lot of Courage to Stand Up to the People You Love, but It’s a Mistake Not To

In Persuasion, 19-year-old Anne Elliot crumbles under the pressures of her social position and breaks her engagement to the young navy officer Frederick Wentworth. When she meets him again later in her life, she realizes that her feelings toward him never faded. Although she had solid reasons for choosing not to marry Wentworth, Anne bought herself a lifetime of unhappiness by putting her family’s expectation that she marry well above her own needs and happiness. At 26, Anne will no longer meekly accept a fate she did not choose, and she finally marries the love of her life.

Even If the Odds Are Stacked Against You, Follow Your Heart

Mansfield Park's Fanny Price is brought up with her wealthy relatives, the Bertrams. Alhough she receives a similar education and is accorded some of the same privileges, her aunt and uncle never let her forget that she is not at their level. Yet Fanny becomes her uncle’s pride and joy when she receives a marriage proposal from the wealthy, fashionable Henry Crawford. But though Fanny has little power to wield, she still refuses to bend to her uncle’s will and accept a marriage of convenience to a man she does not trust. Holding fast to her convictions, Fanny weathers her uncle’s rage and resentment, and ultimately finds her happy ending.