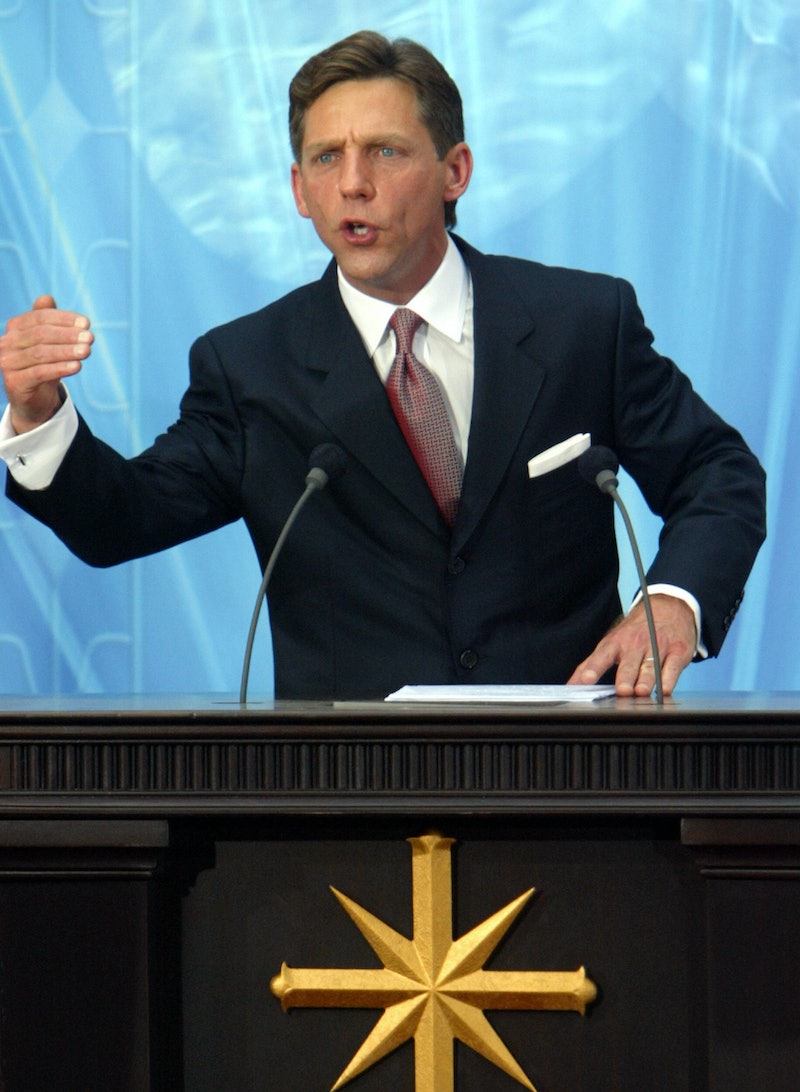 As you may have heard, there's a big documentary premiering on HBO this week, and it's apparently striking fear into the heart of a hugely controversial organization: the Church of Scientology. On Sunday, filmmaker Alex Gibney's Going Clear: Scientology And The Prison Of Belief will air for the very first time, and the Church doesn't seem to be taking it so well. In fact, if you're looking for evidence of just how frightened this film appears to have them, just take a look at Twitter — at Scientology's "Freedom Media Ethics" Twitter account specifically.

The Twitter account was apparently created by either the Church of Scientology or its members, according to The Hollywood Reporter. In its bio, it links to a statement from the Church of Scientology disproving the documentary's claims (which can be read in full here). It really can't be overstated how aggressive, propagandistic, and vehement this Twitter account is, and as such, how Scientology might be feeling about things. An important thing to know about Scientology is that virtually all doctrine, such as it is, flows directly from the Church's founder, the late writer L. Ron Hubbard.

And Hubbard's philosophy when posed with a threat, crisis or criticism was very plain — he authored Scientology's "Fair Game" policy, stating that enemies of the Church could be rightly "tricked, sued, lied to or destroyed." It's an order the Church has made good on over the years — in the 1970s, in fact, they allegedly attempted to hound and falsely litigate a critical author into a mental break, as revealed in documents later seized by the FBI. (The Church, of course, said issues with the author "were resolved.") It's apparently in that same spirit of "smear at all costs" that Freedom Media Ethics has been operating.

Suffice to say, a trip to @FreedomEthics is a trip down a rabbit's hole of what seems to be spin, propaganda, and character assassination at all costs. Countless claims are made against former members of the Church who have since defected and became sources for Gibney's film, which is based on a book of the same name by Lawrence Wright — that they're abusers, drug addicts, tabloid-peddlers, perjurers, homewreckers, any line of attack you like.

Of course, whether any of these charges are to any extent true is impossible to ascertain. Taken in full, the Church's alleged methods of familial disconnection, harsh verbal and physical punishments (Articles like its punitive manual labor that the book attests to), and its claim to be the only way to realize potential as an immortal spirit seemingly makes it not that hard to get Scientologists to stretch the truth. (The Church, for its part, has denied any claims regarding punishments.)

For example, Scientology spokesperson Tommy Davis falsely claimed in a 2009 CNN interview — at least, false by the testimonies of countless people who've been in, around or related to members of the Church over several decades — that it didn't disconnect families from apostates. Davis' fib was one of many factors which led director Paul Haggis to ultimately abandon the the organization. Haggis' example is a particularly evocative one — now, for little more than the crime of leaving a religion and speaking out against its abuses, he's got to deal with a slew of Scientology-produced smears, including an awful video of his own sister, still in the Church, excoriating him as a "chronic liar."

For a Twitter account representing a religion that claims to have millions of members, its follower count is very low, just 558 as of this writing. This is possibly illustrative of a problem Scientology really wouldn't want people to know — in spite of its immense wealth and property portfolio, a source in Lawrence Wright's book alleges their true membership clocks in at a paltry 30,000 or so.

I get that it's tough when you lack profile — I don't even have that many Twitter followers, though again, I'm not a social media arm of an allegedly thriving religion — which could be why it's been pumping its messages out through promoted tweets, and has been getting a whole lot of derision for it.