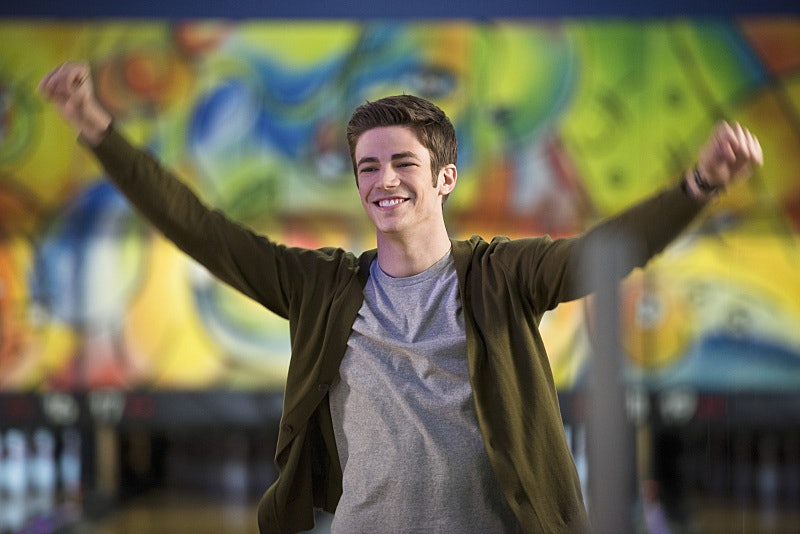 Have you ever thought to yourself, "I wish there were more adorkable masked vigilantes"? No, wait, lemme guess: You're probably thinking, "I wish everyone looked like Oliver Queen, TBH." But this past fall we got a brand new masked vigilante, and though he doesn't look anything like Oliver Queen — dare I say it? — we might just love this new guy more. Grant Gustin plays the most adorkable Barry Allen on The Flash and I never want to go back to a time without this lanky tripping-over-words speedster. As nice as it would be for everyone to be able to complete the salmon ladder, I do wish there were more crime fighters out there wearing converse, skinny jeans, and blushing over girls. Barry Allen, please never change.

This season of The Flash has given fans so many amazing moments that have made us fall head over heels in love with Barry. There's a reason there are multiple Barry Allen 'ships: there's Smoken (Felicity and Barry), SnowBarry (Caitlin and Barry), WestAllen (Iris and Barry), and Thallen (Eddie and Barry — I'm not making that up). And none for Linda Park, bye!

Considering the surplus swoon/giggle moments already, who knows what the rest of The Flash might bring. To hold you over for now, here are the 14 most adorkable Barry moments.

Let's start off with The Flash pilot, when Barry wakes up from a coma, and discovers that he doesn't even need to hit the gym.

Joe mentions to Barry that he's "acting weird," and Barry's like, have you met me before?

Gosh, what a fiiiiiine outfit it is, too.

Barry Mastering The Art Of Asking Iris Out

Let's be honest with ourselves for a second. If this is how Barry asked me out on a date, I wouldn't hesitate for a moment. It's Iris' fault for acting so confused about it. (But then again, Barry did know that they had kissed in the future #TimeTravelProblems.)

What even is this? What is this face? This face, this is a great face.

Barry Trying To Be Brave

While eating a spicy pepper, that even he can't handle. Hey, Barry, don't worry, we can't win them all.

Yeah, Barry, you locked up those metahumans, way to go!

Yeah, Barry, you got a strike in bowling, way to go!

It might only be about 10 seconds long, but it's the best 10 seconds of the episode. Also, LOL at Caitlin going, "he's so fast!" Bring back Drunk Caitlin and Singing Barry please.

Barry Trying To Be Smooth

When Iris and Felicity meet for the first time, Barry tries to make a joke, and then immediately regrets everything.

Watch out for that door, Bar.

Barry Trying His Hardest To Flirt With Felicity

He showed up in Central City SO COCKY.

Some jerk tries to mug Barry, and he thinks it's the funniest thing that's ever happened to him. It's like he's honored that some guy would choose him over everyone else. But oh boy, did that criminal pick the wrong person.

Barry is like an excited puppy that you just want to love and cuddle forever.

More like this
If You Want More Barry, There’s Good News
By Kadin Burnett
Regé-Jean Page Spoke Out On His Rumoured 'Bridgerton' Return
By El Hunt and Maxine Harrison
'Stranger Things' Season 4 Volume 2 Trailer Teases New Episodes Coming July 1
By Grace Wehniainen and Gabrielle Bondi
The 'Ms. Marvel' Review Bombing Controversy, Explained
By Radhika Menon
Get Even More From Bustle — Sign Up For The Newsletter