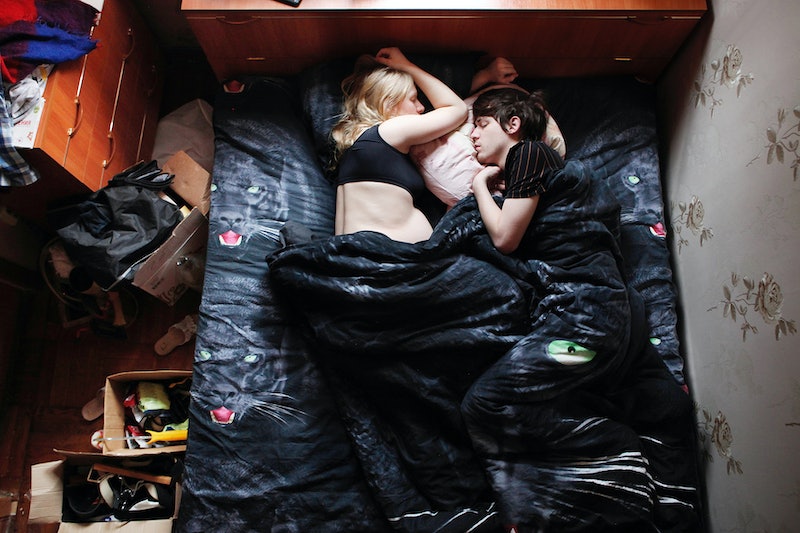 There is so much hype about capturing newborns' first moments from the second they come out of the womb and all the subsequent moments after, but the truth is, babies change their parents' lives long before they're born. Even during the pre-birth waiting time, expecting parents are already shifting toward arguably the biggest change in their lives someone can experience. It is this vulnerable transition that photographer Jana Romanova captures in her photo series "Waiting," which features overhead pictures of expectant parents sleeping in the months before their babies are born.

All of the photos in the series feature young parents in Russia, and the process behind each photo is both fascinating and tedious. Romanova approached many couples with the possibility of featuring them in the series, and said most of the time people were shocked at the idea of a photographer standing on a ladder taking pictures as they slept, and said no. But thankfully, the couples who saw the potential in this powerful series agreed to it, and the results are testament to the beauty of these growing families.

Romanova, who works for a rescue division during the day, says that the photo project was a welcome relief compared to some of the gruesome things she photographs at her job. Once she decided to embark on this project, her goal was to capture the 40 photos to represent the 40 weeks of pregnancy.

Romanova shared that the trickiest part, beyond getting people to agree, was maintaining her posture on top of the high ladder she used to capture the shots. Imagine for a second what kind of pose you'd have to be in: your arms straight out holding a bulky camera over strangers' heads, waiting for them to move. It sounds unbearable even for a minute, let alone half the night.

The inspiration for the series was basically an accident: Six years ago, Romanova took a picture of her sleeping, expectant friends, and was struck by the beauty of the image. In years to come, she sought to capture that same fragile beauty in moments of rest with other families.

Beyond equipment and lighting and waiting for poses, there are a ton of other things she has had to be wary of, including pets. In an article she wrote featuring the images on Medium, she shared the funniest anecdote of all:

Once I agreed with a pregnant lady to photograph at her apartment early in the morning. She opened the door for me, pointed toward the tea and kettle and went back to sleep. After half an hour of waiting, I entered the room, climbed the ladder and started to shoot. Soon after I started photographing, the husband opened one eye. Then the another.

There was real fear in his eyes. Staring at me, he touched his wife’s arm and asked, “Masha, who is this?” Her sleepy voice replied, “It’s a photographer, darling, go back to sleep.” He rolled over and fell back asleep. Later, I found out that he never recalled this situation, being sure it was just a dream.

She also explains not just the attitudes she wishes to capture with the project, but the value of its historical context as well:

I captured moments when people don’t care about their appearance; and they are natural. Waiting investigates not only their attitude to each other during the period of expecting a baby, but also the way young families live in big cities of modern Russia, 20 years after the fall of the Soviet Union, the country that will be known to their children only from history books.

Now that Romanova has completed the project, she is tasking herself with turning it into a "Waiting" photo book. She currently has an Indiegogo to finance the book's creation, where she is already more than halfway to her $4,500 goal. It will feature all of the images she has captured over the years, divided into four chapters describing both her journey with the pictures and the families in them.

Jana already has a book dummy made up, and will have the photo book published by June 2015. You can learn more about her creative process in this video:

More like this
5 Ways To Stand In Solidarity With Women In America From The UK
By Sophie McEvoy
How To Fight For Reproductive Rights, Based On How Much Time You Have
By Courtney Young
American Girl Doll Memes Are Going Viral On Instagram & Tiktok
By Emma Carey
What Is A “Softboy?” The TikTok Term & Aesthetic, Explained
By Courtney Young
Get Even More From Bustle — Sign Up For The Newsletter