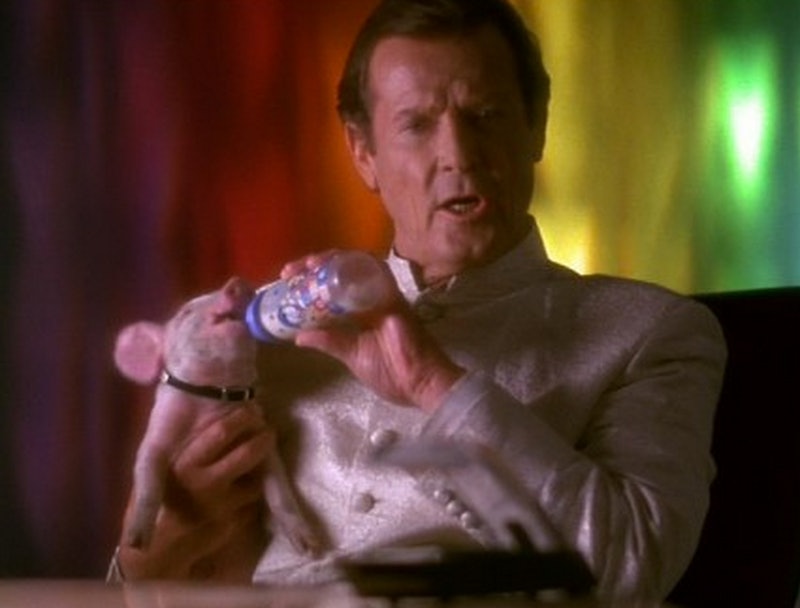 It's been 10 long months since the Game of Thrones Season 4 finale aired, and waiting for Season 5 to begin was as miserable an experience as being transported across the sea in a cramped crate. Alas, the wait is over. Westeros has returned to HBO. Game of Thrones Season 5 is finally here. Here are my three main takeaways from Sunday night's GoT premiere:

If I were in your shoes, I'd want me to explain #3. Understandable. I know I was caught off guard by the realization when it crossed my mind during the closing credits, and it was my own realization. It look me over four seasons to notice it, but now I cannot un-notice it: The leather legging-wearing GoT character speaks like the enigmatic ascot-wearing Spice World character. Both Emilia Clarke’s Daenerys and Roger Moore’s The Chief sound like they’re reciting poetry. Descriptive, authoritative, fantastical, dramatic, and occasionally violent poetry.

No, that's not The Chief telling Clifford he must wait to braid his hair until the Spice Girls' concert at Royal Albert Hall is over. That's Dany informing her brother, Viserys, he is not worthy of a plaited 'do. A braid is reserved for the Dothraki, duh.

QUOTE #2: "The headless chicken can only know where he's been. He can't see where he's going."

Might this be part of one of Dany's pump up speeches before she leads her army into battle? Nah, it's just The Chief being The Chief.

This one is easy. Obviously, it's James Bond, er, The Chief.

QUOTE #4: "We will lay waste to armies and burn cities to the ground!"

The Chief gets fairly fired up (har har har) from time to time, but he never tells Clifford to commit arson. This is all Daenerys.

QUOTE #6: "You saw me step into the fire, you watched the witch burn. What did the flames do to me, do you remember?"

That Dany sure loves fire.

QUOTE #7: "You're both here to advise me. I value your advice, but if you ever question me in front of strangers again, you'll be advising someone else. Is that understood?"

No, The Chief doesn't spew this threat when Clifford requests some time off on behalf of the Spice Girls. This is Dany laying down the law.

QUOTE #8: "When the rabbit of chaos is pursued by the ferret of disorder through the fields of anarchy, it is time to hang your pants on the hook of darkness. Whether they're clean or not."

"Anarchy" and "hook of darkness" sound like things Dany would say, but this is actually a Chief original.

QUOTE #9: "I will take what is mine with fire and blood."

Is The Chief battling it out with someone over the last Spice Doll at his local K-Mart? Great guess, but no. Where there is fire, there is Dany.

This is The Chief, but that doesn't stop me from picturing Dany yelling this at her dragon children as they mischievously chase a flock of defenseless pigeons.